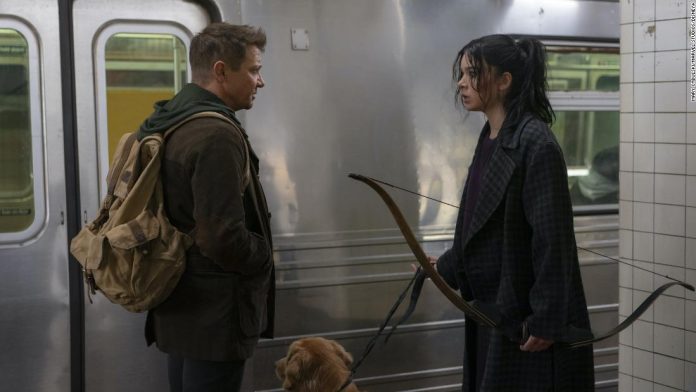 The streaming service now has 129.8 million subscribers, a gain of nearly 12 million in the company’s fiscal first quarter. Those results beat expectations and were a rebound for the media company after a sluggish fourth quarter in which Disney+ gained only 2 million subscribers.
The positive results sent shares up as much as 9% in early after-hours trading.
Overall, Disney (DIS) nabbed $21.8 billion in revenue in the quarter, up 34% from the year-ago period. As for profits, the company reported $1.1 billion in the first quarter, up more than 100% from last year.
Bob Chapek, Disney’s CEO, said in the company’s letter to investors Wednesday that the company had “a very strong start to the fiscal year” and noted the success of its streaming efforts and “record revenue and operating income at our domestic parks and resorts.”
“This marks the final year of The Walt Disney Company’s first century, and performance like this coupled with our unmatched collection of assets and platforms, creative capabilities, and unique place in the culture give me great confidence we will continue to define entertainment for the next 100 years,” Chapek added.
The results alleviated investor’s concerns that Disney+’s growth was slowing — at least for now. The company’s November earnings report had shown lackluster results. Then, last month, the stock of Netflix — the industry’s leader in streaming — tumbled due to weak subscriber guidance.
On Wednesday, however, worries around Disney’s streaming unit, which includes Hulu and ESPN+, were a distant memory.
Disney+ got a boost in the first quarter as it streamed a lot of popular content. There was “Hawkeye,” Marvel’s new series about the avenging archer, and “The Beatles: Get Back,” an eight-hour documentary that focused on the band’s recording sessions of its last album. It was directed and produced by Peter Jackson, who previously directed and produced the megahit “The Lord of the Rings” and “The Hobbit” trilogies.
Big films that started in theaters also made their way over to Disney+, including “Shang-Chi and the Legend of the Ten Rings” and “Jungle Cruise.” The animated musical “Encanto” and “The Book of Boba Fett,” a new series from the Star Wars franchise, were also released on Disney+, although later in the quarter.
And there’s more blockbuster content on the way for Disney+. Chapek mentioned on the company’s post-earnings call that “Obi-Wan Kenobi,” the highly anticipated Star Wars series about the beloved Jedi master, will debut exclusively on the service on May 25.
But Disney’s quarter wasn’t all about Disney+. The company’s parks division had a stellar quarter, with revenues of $7.2 billion, more than double the revenues of the same quarter a year ago. This is a big comeback for Disney’s parks, which suffered the most in 2020 and during parts of 2021 because of the pandemic.
Disney said in its post-earnings note that domestic parks are “generally operating without significant mandatory COVID-19-related capacity restrictions,” but the company continues to “manage capacity to address ongoing COVID-19 considerations with respect to guest and cast health and safety.”