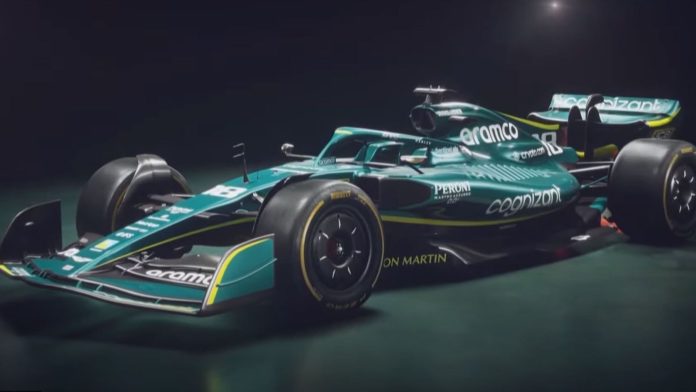 Aston Martin reveal new car for 2022 with updated livery, with splashes of lime green on the traditional racing green; Team will complete first shakedown in F1’s new-look cars at Silverstone on Friday; After finishing seventh last year, Aston Martin want to start journey towards the front

Aston Martin have unveiled the car they hope will propel them further up Formula 1’s pecking order in 2022, as the iconic British manufacturer bids to take advantage of the sport’s huge rules reset.

The team launched their new challenger, the AMR22, at Aston Martin’s Gaydon base, with both Sebastian Vettel and Lance Stroll present to reveal a classic, but updated, racing green livery on a new-look 2022 car.

Aston Martin are the third team to kick-off their season with a launch but their car is believed to be the closest so far to being the finished product.

They will also complete a shakedown at Silverstone on Friday, giving fans a first glimpse of F1’s new cars, which have been built to the technical regulations aimed at improving wheel-to-wheel racing and overtaking.

After finishing a disappointing seventh last year, their first season back in F1 following a 60-year absence, Aston Martin will be desperate for their AMR22 to compete further towards the front.

Vettel, the four-time world champion, will once again be partnered with Stroll, whose father Lawrence owns the team.

But Aston Martin have undergone big changes behind the scenes over the winter, with long-serving team boss Otmar Szafnauer having left, replaced by former BMW and Porsche man Mike Krack.

“We are continuing our journey to the summit of Formula 1,” said team owner Lawrence Stroll.

“And we want to win. But we know that winning isn’t easy, and that’s why we have a five-year plan to keep climbing and to get to the top.”

Vettel added: “Look at that car, who wouldn’t feel excited about the prospect of racing that?

“And when it comes to hopes for the season, I do not think anyone really knows what to expect.

“There are new rules and of course all the teams will be hoping that they have got it right. Everyone wants to win, me included, and no one would be in Formula 1 if their dream was not to win. I am no different.

“The main thing is to keep moving forward and moving up. This is only year two of a five-year plan, so we are still quite near the start. But this team has big ambitions and big plans, and I am hugely excited to be a part of that.”

When are the new cars revealed?

Formerly known as Force India and, after Stroll led a consortium to buy the team, Racing Point, the Silverstone-based outfit were always regarded as one F1’s best ‘pound for pound’ contenders. Now, with Aston Martin’s backing, comes funding and expectation – and while they stress a five-year plan it’s clear that they expect far better than seventh in 2022.

They said designing a car to the sweeping new regulations – described as one of F1’s biggest-ever changes with all-new aerodynamics and tyres – was as much “exciting” as it was “nerve-wracking”.

“I think we’re going to see this car develop highly over the coming season.”

The first pre-season test begins on February 23-25, while the first race of the season is on March 20 in Bahrain.

“It’s a complete reset,” added Vettel. “We’ll see how good we are.

“The rules were made to bring the cars together, to allow overtaking, and there are a lot of question marks over whether that will go as planned, or not. We’ll see what the spread will be like between the cars. But it’s a very different season for all those reasons and also, we’ll be able to develop through the season.”

Vettel, 34, won his fourth title nine seasons ago with Red Bull, and at that time looked likely to push on for F1 records.

“I’ve had such a great past so far with so many great cars and great seasons and a lot of highlights,” he said. “And I’m hooked to that, I’m here to win.

“Last year was very tough because we weren’t really in the mix, we weren’t fighting for something really meaningful and for sure it’s not a secret to say out loud, I’m motivated by winning. I’ve won a lot in the past and that’s what I’m here for.”

The rule changes, which have been long in the making and were initially planned for 2021 before being delayed due to the coronavirus pandemic, mean we have a completely new generation of cars, aimed at improving wheel-to-wheel racing.

The concept is, in essence, a simplified yet striking new-look race car following a drastic aerodynamics overhaul.

The key changes are:

What will the changes do?

The new cars do not just look a lot different, but they should have a marked effect on the on-track product, with more exciting and competitive wheel-to-wheel racing the expectation.

They are designed with a focus on shifting the aerodynamic focus from the wings to underneath the car, making it easier to follow the car in front, and thus improve racing.

F1’s estimations are that the 2021 cars lost 35 per cent of their downforce within three car lengths of the car in front and almost 50 per cent in a single car length. You may have heard the words ‘dirty air’.

The new cars? They claim to drop those numbers to just four and 18 per cent respectively.

“They’re relying a lot more on air passing underneath the car very quickly which sucks the car down onto the ground, and gives what we like to call ground effect,” said Sky F1’s Ted Kravitz.

“You’ve created a vacuum,” added Anthony Davidson. “There’s suction to the ground, and you’re relying less on the wings to give you rear grip, and more on the floor.”