Home Culture ‘Marry Me’ shines the spotlight on Jennifer Lopez in a ‘meet dumb’... 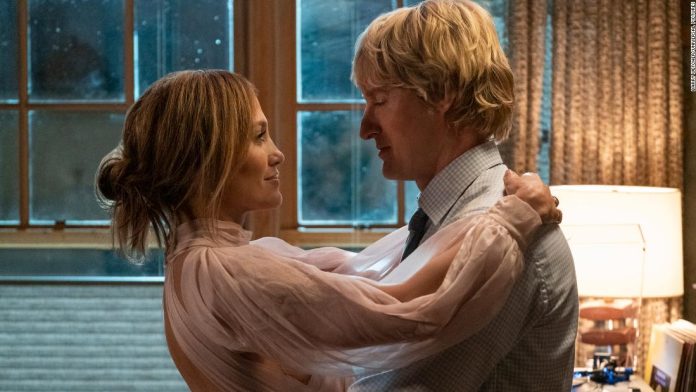 The fascination with Lopez’s personal life — and her romantic history with other famous folk — sometimes overshadows her talents, which is an underlying theme in this film that she also produced. Her return to this territory will surely represent a cause for Valentine’s Day celebration in some quarters, after past entries like “The Wedding Planner” and “Maid in Manhattan.”
That said, the set-up feels especially strained, even before you get to the “Notting Hill”-like notion of the special challenges when an ordinary guy becomes involved with a glamorous entertainer. In a movie that hinges on an impulsive decision, it’s hard not to wish somebody had spent at least a little more time agonizing about the script, which is actually based on a graphic novel.
Lopez’s Kat Valdez is on top of the world, about to marry fellow musical superstar Bastian (played by singer Maluma) during a televised concert. The made-for-TV nuptials will serve the dual purpose of promoting their single “Marry Me,” illustrating how she leads her life completely in the public eye.
Confronted by the news that Bastian cheated on her, she decides to take what she later describes as “a leap of faith” by proceeding with the wedding ceremony by plucking a divorced math teacher, Charlie Gilbert (Owen Wilson), out of the crowd.
It is, as she acknowledges, an “insane situation,” one that her loyal manager (“Game of Thrones'” John Bradley) is eager to make go away. But of course, the plot calls for Kat and Charlie to try maintaining the pretense of a connection a few months for face-saving purposes, just long enough for the pop princess and public-school proctor to begin appreciating each other’s qualities, with the threat that she might reconcile with Bastian looming over the nascent relationship.
A nice guy and a single dad, Charlie is quick to admit that “I don’t fit” in Kat’s under-the-spotlight sphere, which hinges to an unhealthy degree on live streams and followers. The Universal release also goes out of its way to synergistically incorporate sister NBC properties, with “Today’s” Hoda Kotb and “The Tonight Show’s” Jimmy Fallon receiving nearly as much screen time as any of the supporting players except perhaps Bradley and Sarah Silverman as Charlie’s friend and coworker.
Marking the feature debut for TV director Kat Coiro (“Dead to Me” and the upcoming “She-Hulk”), “Marry Me” conjures a few sweet moments, lots of music, and a “King for a Day” quality in Charlie’s plight, with Kat’s jet-setting lifestyle and paparazzi suddenly stalking his every move.
Yet while the movie is unabashed about its rom-com roots, such fare isn’t exactly rare these days, having simply migrated from theaters to venues like Netflix, which seems to churn them out in bunches. (Notably, the movie will premiere simultaneously on NBC’s streaming service Peacock as well as theaters.)
Admittedly, the mere union of Lopez and this light-hearted premise will be enough to prompt some to say, “I do.” Strictly on its merits, though, “Marry Me” is the kind of generic offer all but the most hopeless romantics can afford to refuse.
“Marry Me” premieres Feb. 11 in US theaters and on Peacock. It’s rated PG-13.