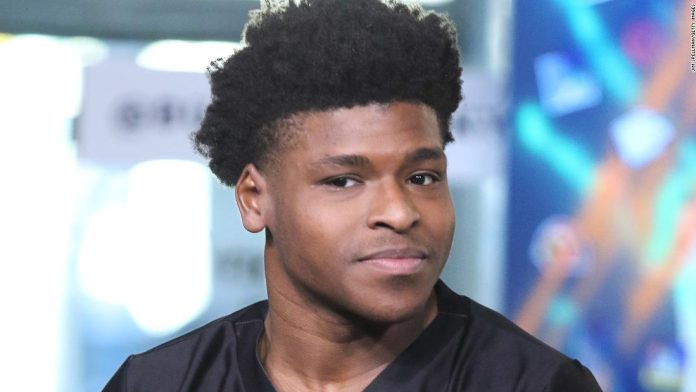 In December of 2020, Harris was charged with a seven-count indictment that was filed in US District Court in northern Illinois.
In a plea agreement with the government, Harris pleaded guilty on Thursday to two of the charges from that indictment stating that he received child pornography and engaged in interstate travel to meet a 15-year-old boy with whom he engaged in sexual relations.
In laying out the charges in which Harris agreed to plead guilty, Assistant State’s Attorney Kelly Guzman said Thursday that beginning around July of 2020, Harris “knowingly received and intended to receive child pornography” by electronic means including by computer.
Harris was one of the stars of “Cheer,” a docuseries that debuted on Netflix in January 2020.
Netflix had no comment when reached by CNN.
Guzman said that Harris communicated with at least one minor via Snapchat and “other online messaging applications.” Guzman said that Harris repeatedly asked the minor to take sexually explicit photographs and videos of himself and send them to Harris in exchange for around $2000.
Guzman said that on May 2, 2019, Harris traveled from Dallas, Texas to Orlando, Florida where he met a 15-year-old boy. Guzman stated that Harris met the minor in a public bathroom where Harris sexually assaulted him.
In laying out the charges and sentencing guidelines, U.S. District Judge Manish Shah said that Harris could face a maximum of 30 years in prison on one of the charges.
Shah set a sentencing hearing for June 28. Harris will remain in federal custody in Chicago until sentencing.
The remaining charges of the indictment that Harris did not plead guilty to will be dropped after sentencing, according to Judge Shah.