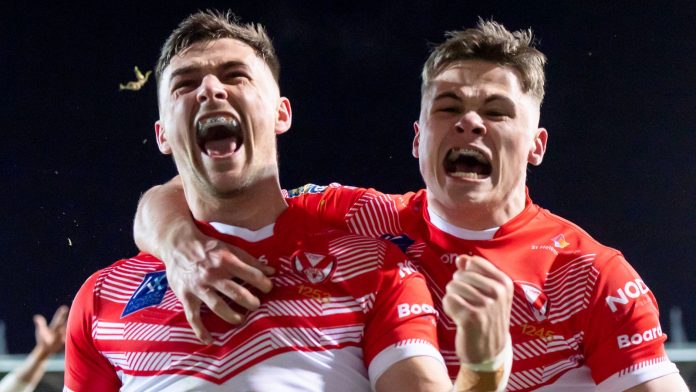 St Helens head coach Kristian Woolf was satisfied with the result, but believes there is more to come from his side after opening with a 28-8 win; Catalans boss Steve McNamara conceded his side were second best, but would not be drawn on Dylan Napa’s red card

Kristian Woolf believes there is still more to come from St Helens after they opened the defence of their Betfred Super League title with a 28-8 win over Catalans Dragons.

Winger Fouad Yaha had the distinction of scoring the first try of the season to give the Dragons an early lead, but they were quickly over-run and collapsed towards the end after prop Dylan Napa was sent off on his Super League debut.

Two tries from Tommy Makinson helped St Helens to a 28-8 win in a fiery season opener at home to Catalans Dragons.

“It’s Round 1, so you can’t get too excited,” Woolf said. “There is a lot of footy to be played, but it gives us a lot of confidence.

“I said before the game we were in a good position to attack the season and I think we showed that tonight. It’s a great little block for us to build off and we’re only going to get better from here.

“It was a good tough physical game of footy and, when the game got flowing, there was some real positives, and I thought our blokes put on some outstanding tries.

“But there were periods of real stop-start. We want people to come and watch our game and we want to entertain and we’ve got to do something about this slowing down and stopping and holding down in the ruck, it just made it ugly at times.”

Woolf was pleased with all his new players, especially former Leeds Rhinos centre Hurrell, who created one try for James Roby and scored one himself from an interception.

“I thought Koni was exceptional,” Woolf said. “I remember when we signed him, I said, ‘If we can get him fit and get him happy, we can get a real performance out of him’.

“He’s got to back that up next week, but he was great out of yardage and defended really well. A couple of tries came off the back of his little offloads and that bit of X-factor he’s got about his game.”

Saints’ victory would have been even more emphatic but for some wayward goal-kicking, with Lewis Dodd missing all but two of his five attempts at goal and Makinson wide with one.

“It was a tough night for that,” Woolf said. “It was slippery and windy, and the majority of our tries were scored out wide.

“The goal-kicking was not as good as you’d like it to be, but it will get better, there’s no dramas there at all.”

Catalans coach Steve McNamara was tight-lipped over the dismissal of Napa for a high tackle on Saints centre Mark Percival.

“I’ll have to look at that more closely,” McNamara said. “Whether it was the right height at first and came over or whether it was direct, I’m not sure.”

The Dragons also had prop Gil Dudson sin-binned inside the first minute for throwing a punch, although there is a suggestion, he may have been the victim of an eye gouge.

“We weren’t good enough tonight, simple as that. The scoreboard doesn’t look great, but we’ll be better next week [at home to Wakefield Trinity].

“There was some pretty brutal contact out there, it was a real physical game. I thought we showed some real intent at times defensively, but we missed some horrible tackles. Our attack never got going either, we were second best tonight.”