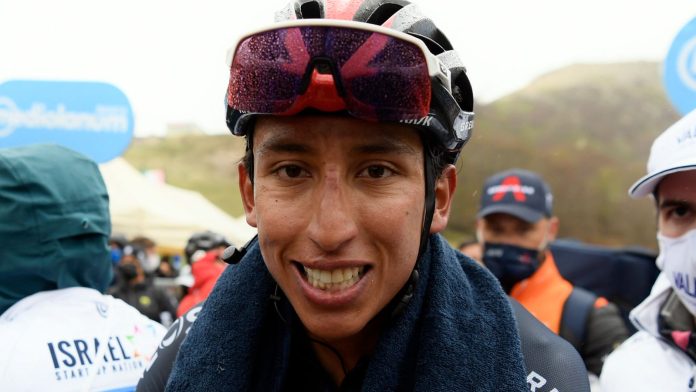 Bernal, who became the first South American to win the Tour de France in 2019 and added the Giro d’Italia to his list of achievements last year, crashed on January 24 near Colombia’s capital Bogota; Mark Cavendish returns to action at Tour of Oman following November crash

Colombian cyclist Egan Bernal posted a video on social media on Thursday of what he said were his first steps less than three weeks after injuring his spine, legs and chest in a training accident that left him needing neurosurgery.

Bernal, who became the first South American to win the Tour de France in 2019 and added the Giro d’Italia to his list of achievements last year, crashed on January 24 near Colombia’s capital Bogota.

The 25-year-old said he had a 95 per cent chance of becoming a paraplegic following the accident. He left the hospital last week.

“Surprise!! My first steps,” Bernal said in the post on Twitter, which accompanied a video of himself wearing a spine and neck brace as he opens a door and walks through it into the sunshine, gesturing that he is okay to the camera.

Bernal was the youngest rider to win the Tour in more than a century and recently extended his contract with the Ineos Grenadiers team to 2026.

Cavendish second on return at Tour of Oman

British cyclist Mark Cavendish started his 2022 season with a second-place finish on the opening stage of the Tour of Oman as the 36-year-old returned to the road after suffering serious injuries in a crash in November.

Fernando Gaviria won the race for UAE Team Emirates on Thursday, holding off Quick-Step Alpha Vinyl rider Cavendish in a sprint finish to the 138km stage from Rustaq Fort to Muscat.

Cavendish suffered broken ribs and a collapsed lung following a crash in the Six Days of Ghent track meeting in November. In the same month, he was assaulted by four armed men during a burglary at his home.

“Coming into the first race of a new season, you are never sure about form and it was good to get the feeling of racing back in my legs,” Cavendish said.

“I felt good throughout the stage and the speed was good at the end, but I was just in the wrong position which meant I had to come around the outside and catching Fernando was just that bit too much.”

Cavendish enjoyed a remarkable return to form in 2021, sprinting to four stage wins at the Tour de France to equal the record of 34 set by Belgian great Eddy Merckx.