Home World Canned cocktails are so big, they’ve made it to the Super Bowl 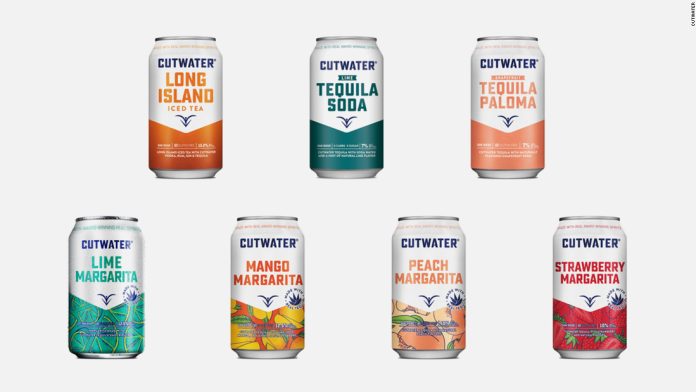 The commercial, an homage to/parody of Apple’s “Here’s to the crazy ones” campaign, is a love letter to the “lazy” ones: People who walk their dogs on a treadmill, use sprinklers to wash their cars and drink pre-mixed cocktails out of cans. The spot features a variety of Cutwater Spirits mixed drinks, like vodka mules, lime margaritas and tiki rum mai tais.
It’s the first national Super Bowl commercial for Cutwater, and the first national spirits ad for Anheuser-Busch during the big game. (Last year, Anheuser-Busch ran regional Super Bowl ads in seven markets for Cutwater).
For Anheuser-Busch, the spot is a way to draw attention to its offerings as the buzzy canned cocktail market heats up.
“The goal of this campaign is to grow national awareness for Cutwater,” Fabricio Zonzini, president of the company’s Beyond Beer unit, told CNN Business. He added that “Cutwater Spirits is Anheuser-Busch’s fastest growing spirits-based ready-to-drink brand and is a major priority for our company,”
Cutwater, which was acquired by Anheuser-Busch in 2019, sells a line of tequila, vodka, rum, whiskey and gin-based canned cocktails, as well as spirits, mixers and alcoholic frozen pops. More innovations are coming this year, Zonzini said.

Ready-to-drink alcoholic beverages and cocktails grew 56% by volume in 2021, according to the Distilled Spirits Council of the United States, making it the fastest-growing spirits category of the year. The concoctions have been overshadowing spiked seltzers, which were wildly popular in 2019 but have since faded in popularity.
And competition within the canned cocktail segment is fierce. In January, Coca-Cola announced two new entrants to the space. One is an alcoholic version of Fresca, called Fresca Mixed, made in partnership with Constellation Brands (STZ). The other is a boozy version of Simply Lemonade, this one made in partnership with Molson Coors (TAP).
Anheuser-Busch (BUD) isn’t just promoting canned cocktails during Sunday’s game.
Bud Light Next, the first zero-carb beer from the alcohol company, will also get an in-game ad.
– CNN’s Jordan Valinsky and John General contributed to this report.