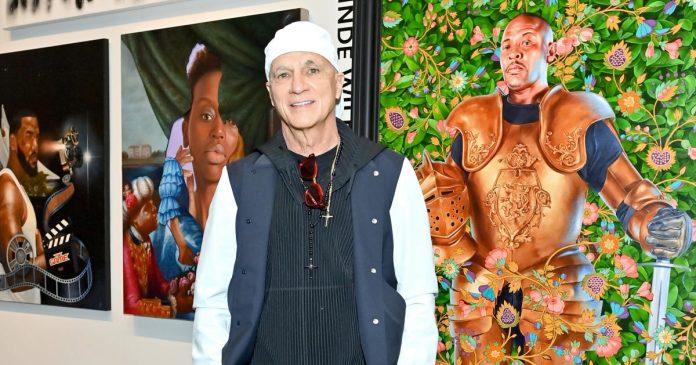 From sweeping a grimy New York studio to presiding over an interactive, innovative exhibit gracing the LA County Museum of Art (LACMA), it’s been a journey for music industry legend Jimmy Iovine.

The New Yorker’s hardworking longshoreman father once boasted to friends that his son had “magic ears. He can hear what you’re thinking.” It turned out to be true – Iovine engineered some of the catchiest, most iconic albums of the 1970s and early ’80s, before putting those magic ears to work coaxing out the talent that defined a generation of music.

After his early days in those grimy studios, Iovine scored the break to end all breaks, engineering records for a roster of artists that sounds like a Rock and Roll Hall of Fame nomination list: Lennon. Springsteen. Patti Smith. Tom Petty.

Parlaying that success into a brash, bold new venture, he headed out west to set up shop in L.A., co-founding Interscope Records. Iovine struck gold when he turned to the streets of South L.A. and the names that rang out in Compton and Long Beach – names like Snoop Dogg (then Snoop Doggy Dogg), Tupac Shakur, and the man who would go on to be his business partner and one of the most financially astute musical artists-turned-moguls of all time, Dr. Dre.

Iovine has always seen where the music world was going, and never more so than when the record labels wrestled with the advent of downloadable music in the early 2000s, an existential crisis that could have sunk the industry.

By 2006 he’d moved on from the day-to-day at Interscope and, alongside Dre, co-founded Beats — not only a headphone company but a music giant in its own right with a huge digital library — before selling it to Apple for $3 billion and setting the foundation stone of Apple Music in the process. After a spell as an executive with the Cupertino-based tech behemoth, Jimmy Iovine, maybe for the first time in his life, slowed down.

“Jimmy basically came out of retirement” for this, joked John Janick, Iovine’s hand-picked successor as Interscope CEO. “I did, I did,” Iovine shot back.

They’re at LACMA early one Saturday morning, discussing their latest shared project, a hugely ambitious art-meets-music project that has seen some of the world’s most sought-after visual artists reimagine the album covers of some of Interscope’s most iconic titles — including Dre’s “2001” and “The Chronic,” 2Pac’s “All Eyez on Me” and “Me Against the World,” Lady Gaga’s “The Fame Monster,” and U2’s “All That You Can’t Leave Behind.”

The visually stunning exhibition is a “cross disciplinary celebration of culture,” the Black Eyed Peas’ will.i.am, whose album “The E.N.D” got the treatment, told CBS News.

As always, there’s an innovative digital component to it. Open Snap, point your phone’s camera at the artwork, and the best-known tracks from the album it’s based on automatically play on your phone.

Iovine and Janick followed the Interscope playbook of finding the best talent they could and letting them run wild with it. “You can’t follow a pattern to anything creative or you’re dead,” Iovine told CBS News. “You gotta let it go.”

Janick says the artists, whose ranks include Kehinde Wiley, Ed Rascha and Takashi Murakami, “got it from day one.”

lovine, for the past decade or so a serious art collector, agrees. He says he’s confident that the artists “did some of their best work for this project.”

Wandering through the exhibition space is not only a window into the sway Iovine still has — able to mobilize 46 of the world’s top artists to pull off an exhibition in just 11 months — but also a visual testament to the depth and range of Interscope’s back catalog.

And it’s reviving at least part of that extensive list. The reimagined album covers have already gone on sale as ultra-limited editions of 100 apiece, with the proceeds going to Iovine and Dre’s foundation, which is building a state-of-the-art high school in South LA.

Is Eurovision coming to your city next year? UK host shortlist revealed

Han Solo’s blaster from Star Wars expected to fetch up to $500,000 at auction