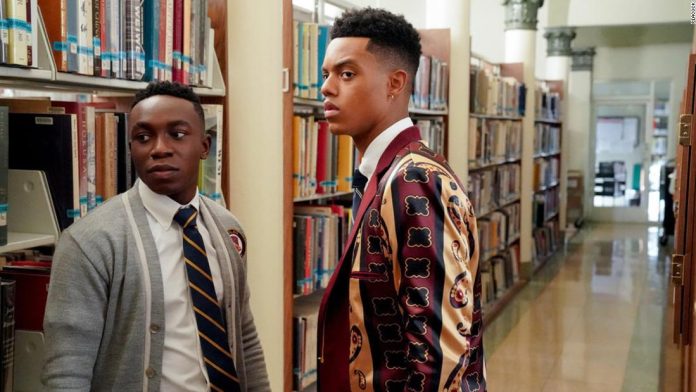 Inspired by a 2019 fan-made trailer that went viral (and whose creator, Morgan Cooper, is a director, producer and co-writer here), the series could easily have become a classic case of taking a three-minute gag too far. Yet the creative team under showrunners T.J. Brady and Rasheed Newson blows up the opening credits of the original sitcom — which explained how the character came to live with his wealthy relatives — in a very clever way.
Will Smith (Jabari Banks) has a bright future, with a looming basketball scholarship that will take him out of Philadelphia and put him on a path to bigger and better things. But an encounter with a gang member goes wrong, and his hubris leads him to try settling matters on the playground, a plan that backfires in a dangerous manner.
Understandably concerned, Will’s mom (April Parker Jones) ships him off to Los Angeles and relatives he barely knows, as evidenced by his stunned expression when he first catches sight of their gated mansion. “You did not tell me that your family was White,” the driver (Jordan L. Jones) says.
Still, fitting in isn’t sitcom-easy in this telling, with Will’s arrival provoking jealousy from his cousin Carlton (Olly Sholotan), who’s hiding his own secret, and tensions involving his Aunt Vivian (Cassandra Freeman) and Uncle Philip (Adrian Holmes) — the latter in the midst of a race to become District Attorney, but facing questions about street cred due to his zip code.
As constructed, there’s a strain of “Gossip Girl” running through “Bel-Air’s” DNA, given the power dynamics at the posh private school the kids attend. The show also explores racial politics, with Will responding angrily when one of Carlton’s White friends sings provocative rap lyrics, an objection that Carlton dismisses.
Already the recipient of a two-season order, no one can accuse the new series of moving too slowly; rather, the writers race through soap-opera-ish plot developments in the first three episodes, provoking skepticism about whether the producers have frontloaded the action a little too much.
That, too, underscores the difference between “The Fresh Prince” — introduced on a broadcast network more than 30 years ago, and celebrated in a 2020 reunion special — and “Bel-Air,” situated on a streaming service where the game is to burn brightly and garner attention.
Promoting the show during the Super Bowl might not be the ideal juxtaposition for a dark drama, but in terms of percentages, if the series can hook a tiny fraction of those viewers the bet will pay off for Peacock.
While it’s possible to second-guess that strategy, in terms of delivering a show improbably worthy of such pricey TV real estate, “Bel-Air” has held up its end of the bargain.
“Bel-Air” premieres Feb. 13 on Peacock.