Home Culture Why the LGBTQ community loves — and will always love — Whitney... 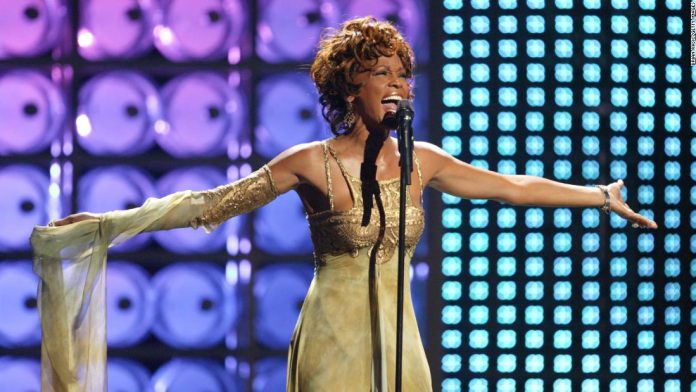 In the Season 9 finale of “RuPaul’s Drag Race,” in 2017, Sasha Velour faced off against Shea Couleé. As the two queens approached the end of their lip-sync battle, Velour left the audience stunned when she lifted her wavy red wig from her bald head and, to everyone’s surprise, unleashed a swirl of rose petals.
It was one of the most eye-popping wig reveals in the show’s history, and Velour, who’s gender-fluid and uses “she” in drag, eventually won the crown. But something else also made that moment special: the music, in particular Whitney Houston’s 1987 chart-topper “So Emotional.” Just as Velour began to hoist her wig, you could hear Houston’s voice thunder, “I get so emotional, baby / Every tiiiiime I think of you.”
I often revisit that performance and reflect on the joy that it and so much of Houston’s music bring me, especially on days like today, which marks the 10-year anniversary of her death, on February 11, 2012. And especially as a gay man. Many queer people — and particularly gay men — see slices of their own struggles and aspirations reflected in the beloved superstar’s life and work, and her presence resonates throughout queer culture. (Remember that charming dance sequence in the 2018 coming-of-age movie “Love, Simon,” about a closeted gay teen?)
“I do not think that anyone would dispute Houston’s gay iconicity,” the French academic Georges-Claude Guilbert writes in his 2018 book, “Gay Icons: The (Mostly) Female Entertainers Gay Men Love.” “She was beautiful, she was black, she was fierce (sometimes), she sang dance music.”
But Guilbert’s is only a partial explanation. How did Houston become, and remain, a gay icon?

At least part of Houston’s queer appeal is the profoundly familiar isolation that edges many of her films and songs, according to Aaron Foley, a journalist and Houston superfan.
“There’s an undercurrent of loneliness in a lot of Houston’s work,” Foley said. “Think of ‘The Bodyguard.’ She doesn’t get the hero at the end. They break up. That’s the part of the movie that people forget. So, there’s a sense of longing, and a sense of trying to find yourself.”
Also consider Houston’s 1992 version of “I Will Always Love You,” the most famous track from “The Bodyguard.” The jazzy soul ballad opens with a famous, 45-second a cappella introduction. Houston extends a vow of eternal love even as her relationship ends, distilling the queer trope of desire balanced with denial.
The cerebral Velour sought to capture the feeling of isolation, among other things, in her show-stopping “Drag Race” performance.
“I saw the rose petals as a kind of iconography or metaphor,” she told CNN. “Loneliness, heartache, love, loss, grieving — I can hear different colors of all of that in ‘So Emotional.’ I wanted to take something broad like that, and just show how it builds and builds as her (Houston’s) performance gets more intense.”
Notably, isolation was a major part of Houston’s real life, too. The efforts of her record label, Arista, to make her into a palatable pop persona, an all-American sweetheart, took a heavy toll on the singer. She was buffeted by claims of having “sold out” to the White mainstream because her early music was supposedly too pop, and she was stalked by gossip about her close relationship with her best friend, Robyn Crawford.
(In her extraordinary 2019 memoir, “A Song for You: My Life With Whitney Houston,” Crawford says that she and Houston were sexually involved earlier on in their decades-long friendship, but that the physical intimacy was brief because Houston was worried about what the endless judgment might mean for her career.)
“Houston faced a lot of challenges with identity,” Foley said, referring to the singer’s battles with her racial identity and sexuality. “There were parts of her identity that she kept hidden away and struggled with, but then there were parts that we saw in concerts — when she was glammed up and glamorous.”
Queer people can probably relate to that; there are times when we keep our sexuality concealed, particularly when doing so might help us avoid danger or scrutiny.
It’s worth spending a bit of time on the aforementioned “Love, Simon” sequence, because it crystallizes another aspect of Houston’s queer appeal: the feeling of liberation that the singer’s music radiates.
The title character, 17-year-old Simon Spier (played by Nick Robinson), is mulling over his anxieties about coming out when he indulges in a fantasy. “When I go to college in Los Angeles, I’ll be gay and proud,” he promises. As he sticks a poster of Houston on his imagined dorm room wall, the singer’s 1987 smash “I Wanna Dance With Somebody (Who Loves Me)” — a must-play at gay bars and queer dance parties — kicks in. Simon envisions what it would be like to make it through high school and live a full and happy life as an out gay man, prancing around campus.
Simon’s dream is about liberation, about the freedom he believes he’ll find if he can get to a place where he can be himself, with Houston’s peppy lyrics as his guide. Indeed, it’s Houston’s music that makes Simon’s personal struggles grow a little dimmer. Of course, liberation isn’t a uniquely queer experience. But for a community that’s long suffered from casual and state-sanctioned bigotry, it has a distinct resonance.
Gerrick Kennedy, the author of the new book “Didn’t We Almost Have It All: In Defense of Whitney Houston,” echoed some of these sentiments.
“She was really the first one to do those big house remixes in a way we weren’t really seeing from Black girls,” Kennedy told CNN. “There was an element of performance in a space where queer people, especially Black queer people, were able to find freedom and liberation. That’s our connection with diva figures — how they make us feel, and it’s usually rooted in some form of liberation.”
Kennedy went on, saying of the release of 1998’s “My Love Is Your Love” and “It’s Not Right but It’s Okay” (that a remix of the latter is a gay anthem is beyond dispute), “I remember that was the moment when I, a Black queer boy growing up in the Midwest, which was super oppressive, felt free.”
So, maybe it’s actually a poignant brew of loneliness and liberation that makes Houston’s sensibility so appealing to queer listeners. After all, at the same time she acknowledged that something wasn’t right, she insisted that, eventually, it’d be okay.