Home Sport Has Van Gerwen lost his aura of invincibility? 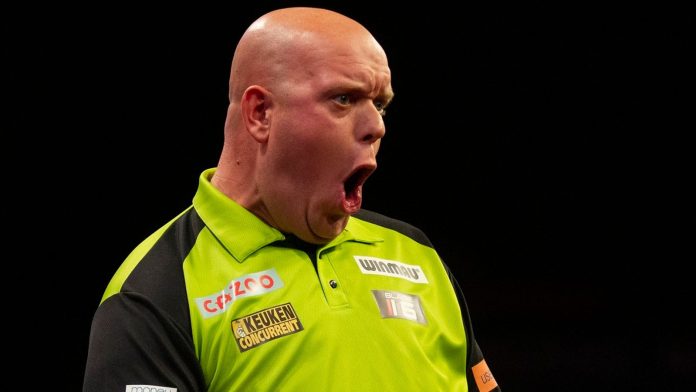 Michael van Gerwen has lost his world No 1 spot and has not won a TV title since November 2020; so where have things gone wrong for the once dominant Dutchman?; Wayne Mardle and Mark Webster spoke to host Emma Paton about ‘Mighty Mike’ and his current decline

Has Michael van Gerwen lost his aura of invincibility? Sky Sports analysts Wayne Mardle and Mark Webster believe the chasing pack are not scared of taking on ‘Mighty Mike’ anymore.

The five-time Premier League champion appeared to be back to his very best on Night Two of the competition in Liverpool on Thursday.

But despite upping that performance with a 105 average in a thrilling semi-final against reigning champion Jonny Clayton, he let a 4-1 advantage slip to the Welshman, losing five consecutive legs to crash out.

“He’s not as ruthless, he’s not as confident and he’s lost that aura”

But ‘The Green Machine’ has not won a TV title since claiming his sixth Players Championship Finals crown in November 2020.

Mardle told Sky Sports: “When you’re losing, like MVG, it’s horrible because you come up here, you’re on your own and you can’t just pass the ball out to the wing and be done with it and hopefully somebody else runs with it, it’s not like that. I fear for Michael van Gerwen more than the others.

“The panic at the moment seems to be from MVG and no one else.”

Webster believes the ‘aura’ surrounding Van Gerwen’s dominance has suffered a decline in the last couple of years.

“It clearly has,” said the former Lakeside champion. “He hasn’t won a major title for almost 15 months now and he lost to a player who averaged around 88 at the weekend (he suffered a third-round defeat to associate member Stephen Burton at Players Championship 2 in Barnsley).

“That’s no disrespect to that player, but when you get away with playing like that, it’s Michael van Gerwen.

“The players aren’t scared of him anymore, he’s not as ruthless, he’s not as confident and he’s lost that aura. He needs to get it back because he’s no longer the world No 1.

“I think he needs a major win and then he’ll get going again or just something to clutch to, because at the minute he looks nervy, edgy, everything he does looks a bit of a struggle at times, but that could all change.”

The Dutchman will hope to put things right when the Premier League roadshow heads to Belfast for Night Three on Thursday, February 17 – live on Sky Sports Arena.

Van Gerwen takes on newcomer Joe Cullen with the winner to meet either Michael Smith or current world No 1 Gerwyn Price for a place in the final.

Check out daily Darts news on skysports.com/darts, our app for mobile devices and our Twitter account @skysportsdarts. We’re back for more Premier League action from The SSE Arena, Belfast next Thursday from 7pm on Sky Sports Arena.