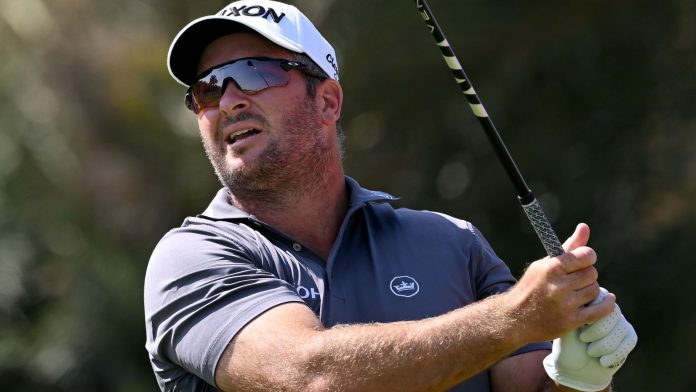 Scott Jamieson is one four players tied for second on 13-under, while fellow Scot Robert MacIntyre is among three players a shot further back; watch the final round live on Sunday from 8am on Sky Sports Golf and Main Event

Ryan Fox will take a six-shot lead into the final round of the Ras Al Khaimah Classic on Sunday as he seeks a first 72-hole stroke play victory on the DP World Tour.

The New Zealander continued his imperious form at Al Hamra Golf Club, moving to 19-under for the tournament with a seven-under-par 65 on Saturday, to follow up his career-best opening round 63 and Friday’s 69.

Scott Jamieson is one of four players tied for second on 13-under, while fellow Scot Robert MacIntyre is among three players a shot further back.

Fox made a stunning start on Saturday, converting close-range birdie putts at the first three holes before sinking a 12-footer at the fourth.

Errant tee shots at the ninth and 12th saw bogeys cancel out further birdies at the eighth and 10th, but Fox steadied himself to score three more birdies on the back nine.

Fox is looking to add to the ISPS Handa World Super 6 Perth title he won in 2019, while the 35-year-old also has two European Challenge Tour victories to his name.

“My head is in a pretty good place,” Fox said. “Ask me that on the first tee tomorrow and I might have a slightly different answer but I felt like I had really good control over the ball today, only hit a couple of bad shots and holed some putts as well.

“I’ve put myself exactly where I want to be and it’s that cliché – it’s all on me tomorrow.”

Jamieson also shot seven-under on Saturday to move alongside Spanish duo Pablo Larrazabal and Adri Arnaus, while Poland’s Adrian Meronk went one better to join them on 13-under.

Jamieson produced a faultless round, making seven birdies without any dropped shots, and holed a 22-foot putt at the 18th to end Saturday in style.

MacIntyre recovered from making two bogeys in his first three holes to shoot four-under, with three back-nine birdies leaving him alongside Japan’s Masahiro Kawamura and German Marcel Siem in a tie for sixth.