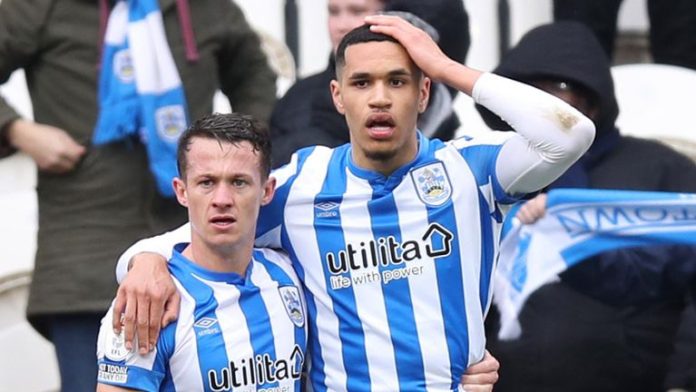 Huddersfield and Sheffield United drew 0-0 on Saturday lunchtime, in a game overshadowed by a controversially disallowed goal for the hosts.

As the half-time whistle approached at the John Smith’s Stadium, former Chelsea academy product Jon Russell headed in a corner, which was chalked off by referee James Linington who had seen Blades goalkeeper Wes Foderingham trip over Danny Ward and not seen the foul on Ward by George Baldock moments earlier.

A tight encounter, littered with promise from both sides, could have been won by Sheffield United with just six minutes of the 90 remaining, but a stunning save from Terriers goalkeeper Lee Nicholls denied John Fleck a winner.

Carlos Coberan’s Huddersfield stay fifth after extending their unbeaten league run – which stretches back to December 4 – to 12 games, while Sheffield United move from 10th up to seventh ahead of the remainder of Saturday’s action.

How the play-off contenders shared the points

Sheffield United employed a robust approach at the start of the Yorkshire derby, hassling and harrying in an attempt to unsettle and knock Town out of sync, given the Terriers had not lost a league game since November 27.

If anything, it only helped the hosts to take control of the game for the first 20 minutes, but they flattered to deceive and were largely unable to get the ball forward to Ward. The Blades grew into the game, but two relatively tame Oli McBurnie headers were the sum of their openings.

Shortly before half-time, there was controversy after Russell powered a brilliant header in from a corner, but his celebrations were cut short when referee Linington ruled it out, seemingly for a foul by Ward on goalkeeper Foderingham.

But, on closer inspection, Ward had been forced to ground by Blades defender Baldock, and was unable to move out of the way of Foderingham, unintentionally impeding him.

Much of the second half passed without incident – that was until the final 10 minutes of the game. The visitors were first denied a penalty when McBurnie went down after he was held off by Tom Lees, while Huddersfield had a more credible appeal turned down after two defenders combined to bring down Danel Sinani in the area.

Paul Heckingbottom’s Blades almost snatched all three points with six minutes to spare when Fleck met an outswinging corner, but his curling effort, which looked destined for the bottom right corner, was miraculously kept out by Huddersfield stopper Nicholls.

Man of the match – Sorba Thomas

The Wales international has been giving Championship defences problems to deal with all season and although he could not manage to help Huddersfield to a decisive goal, his darting runs, crosses and clever passes gave Sheffield United plenty to think about.

Analysis: Should Huddersfield goal have stood?

Sheffield United host Hull City at 7.45pm at Bramall Lane on Tuesday February 15, while Huddersfield return to action at 12.30pm on Saturday February 19 when they travel to Craven Cottage to take on Championship leaders Fulham. Both matches will be available to watch live across Sky Sports.