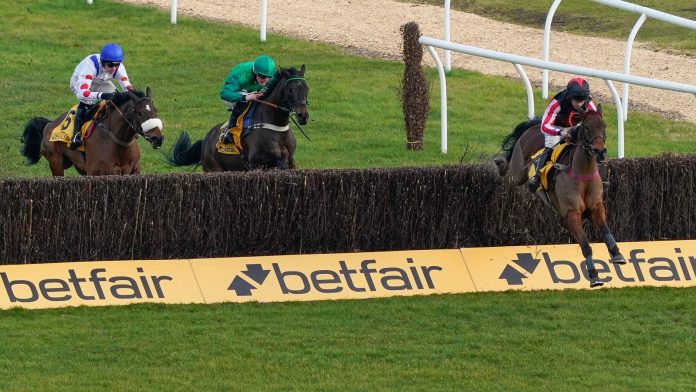 Funambule Sivola made most of the running to win the Betfair Exchange Game Spirit Chase and continue the golden run of Venetia Williams and Charlie Deutsch.

The pair can do little wrong at present and having earned plenty of prize money at Lingfield’s Winter Million meeting Williams provided Deutsch with his first Grade One win last weekend, when L’Homme Presse cruised to victory in the Scilly Isles Novices’ Chase at Sandown.

With Gary Moore’s Editeur Du Gite pulled out of the Newbury feature not long after declarations on Thursday, the way was left clear for Funambule Sivola (9-4) to dictate matters in front.

The diminutive seven-year-old might not get very high at his fences, but one thing he does do is get to the other side quickly.

Last year’s winner Sceau Royal adopted his usual stalking role under new pilot James Bowen, only to get in tight to the fourth-last and always be on the back foot thereafter.

Hitman travelled smoothly for a long way and looked a threat running to two out, but Funambule Sivola never missed a beat up the home straight and it was left to Sceau Royal to chase him home, beaten two lengths.

Williams said: “It was really thrilling. As you can see he is a small horse, but such an intelligent jumper. Not only is he intelligent, he is so quick with it.

“I thought with the ground drying, which it obviously was going to do all week, even though it was going against Royale Pagaille (in the Denman Chase), this fellow was going to handle it. This fellow is not short of pace.

“For the time being, he is a two-miler. It is quite clear the route he should take for the immediate future.

“The Queen Mother Champion Chase is to be discussed, but I don’t think it will be a long discussion!

“I will talk to the owners, but yes. A few horses have got close to Shishkin, only for Shishkin to look behind him and scoot away at the last.

“Today was a stronger performance. I try to avoid having any expectations, but he has fulfilled hopes, let’s put it that way.”