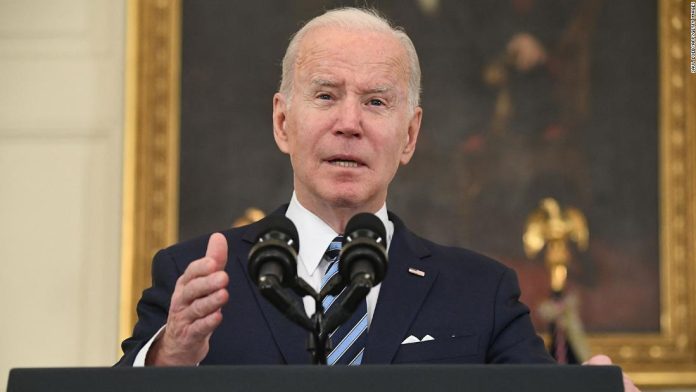 The funds, held in the US, were frozen following the collapse of the central government in Kabul in August. Half the remaining assets — $3.5 billion — could go toward providing relief inside the country, where fears of mass starvation have taken hold in the months since the Taliban took over.
The remaining $3.5 billion will be made available for terror victims, who have been fighting in court for compensation using the frozen funds. Their claims will still be litigated by a judge, and senior White House officials said unfreezing the money was a necessary legal step in order for claimants to have their day in court.
The New York Times first reported Biden’s planned executive order.
In a call with reporters Friday, senior administration officials called the move just “one step in a process that might lead” to the unlocking of these funds for the benefit of the Afghan people, noting that the US is moving to put the reserves in a trust that will be “separate and distinct” from the ongoing American humanitarian assistance to Afghanistan.
Officials said the funds could extend beyond only humanitarian aid.
“We plan to consult widely in the coming months, including with the Afghan community, about the governance and use of the funds we are seeking to release,” an official said.
Families of 9/11 victims have been pursuing financial compensation from the Taliban for years and renewed their efforts following the group’s takeover of the country last year and the subsequent freezing of the Afghan assets. The Biden administration has been weighing how to proceed for months. The officials said that the $3.5 billion remaining in the US will be “subject to the ongoing litigation by US victims of terrorism.”
Biden’s decision to split the frozen funds is drawing some scrutiny, including from a group representing 9/11 families that argues all relatives of victims, not just the ones currently suing for compensation, should be allowed access to the frozen money.
“All family members of those killed on 9/11 in the terrorist attacks must be treated equally. Anything short of equitable treatment for and among the 9/11 families as it relates to these frozen assets is outrageous,” said Brett Eagleson, the son of a 9/11 victim, in a statement.
Meanwhile, there’s an outcry among activists who say allowing any of the frozen assets to go to 9/11 families is wrong, since no Afghans perpetrated 9/11 and the money belongs to the Afghan people, who had no role in the attack.
US officials have responded to the latter claim by saying they have an obligation to put this money aside while the 9/11 claimants make their case in court.
“Absent action by us, these funds were likely to be tied up in courts for years, while the action we have taken stands the best chance of more quickly freeing up a large portion for humanitarian support,” a White House official said.
The Taliban have claimed rights to the funds, which include assets like currency and gold, but the US has declined access to them after Afghanistan’s democratic government fell. The US has not recognized the Taliban as the government of Afghanistan.
Taliban spokesman Mohammad Naeem also criticized the United States for not unfreezing all the funds to Afghanistan.
“Stealing the blocked funds of Afghan nation by the United States of America and its seizure (of those funds) shows the lowest level of humanity … of a country and a nation,” Naeem tweeted.

Afghanistan’s economy has collapsed in the months since the US fully withdrew its troops and the central democratic government fell. International assistance has also been mostly shut off as countries weighed whether to send aid to the Taliban.
Even before the Taliban seized power in Afghanistan in August, poverty and food insecurity were widespread due to back-to-back droughts, economic decline, protracted conflict and the pandemic.
But in the months after the takeover, the crisis rapidly worsened. Billions of dollars of foreign development aid dried up, depriving the country of money that had been propping up the economy, key services and aid workers.
As winter set in, nearly 23 million people — more than half the population — are facing extreme levels of hunger, according to the United Nations. At least a million children under 5 are at risk of dying from starvation.
The International Rescue Committee ranked Afghanistan No. 1 on its annual emergency watchlist of countries whose humanitarian crises are expected to deteriorate in 2022.
In January, the US announced $308 million in humanitarian aid for the people of Afghanistan, as well as additional Covid-19 vaccine doses. That brought the total US assistance to the country to $782 million since October 2021.
Lawmakers have urged the Biden administration to take action to avert an economic disaster in Afghanistan, proposing measures that could provide relief. In a December letter to Secretary of State Antony Blinken and Treasury Secretary Janet Yellen, a group of House lawmakers advised the administration to release frozen Afghan funds “to an appropriate United Nations agency to pay teacher salaries and provide meals to children in schools, so long as girls can continue to attend.”
In December, the Biden administration announced it was lifting some restrictions on the types of aid that humanitarian organizations can provide to Afghanistan that would enable support for educational programs, including paying teachers’ salaries.
Speaking this week, the US State Department’s Special Representative and Deputy Assistant Secretary for Afghanistan Tom West said, “It’s no secret that the country is in the midst of not just widening humanitarian crisis, but also an economic cratering.”
“It is absolutely heartbreaking what is happening in Afghanistan,” West told CNN’s Becky Anderson in an interview. “It’s the first thing I think about when I wake up. It’s the last thing I think about before I go to bed. As you say there are millions of Afghans suffering, and in many ways they’re suffering not for decisions they made but for decisions that others made.”
This story has been updated with additional reporting.
CORRECTION: A previous version of this story misstated the timing of the Taliban’s takeover of Afghanistan. It took place in 2021.

CNN’s Betsy Klein and Anna Coren contributed to this report.