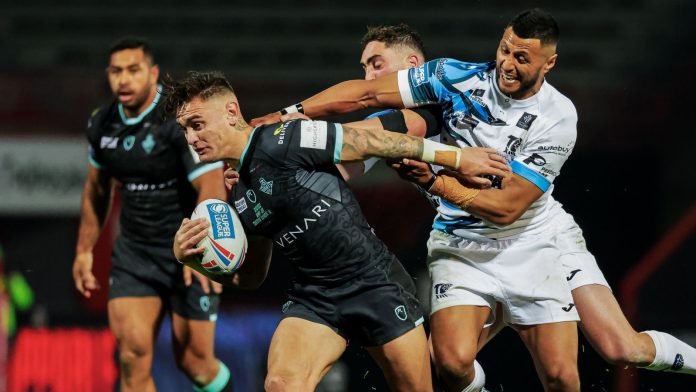 Two tries from Jake Wardle and a man-of-the-match display from debutant Danny Levi helped the Giants spoil the party in the South of France; Toulouse had led 10-0 through tries from Matty Russell and Ilias Bergal

Toulouse Olympique’s dreams of making a splash on their Super League debut were crushed by Huddersfield Giants as the newcomers went down 42-14.

The newly-promoted French side made a flying start to lead 10-0 midway through the first half, but were ultimately out-played and out-muscled by Ian Watson’s Giants.

Two tries from Jake Wardle and a man-of-the-match display from debutant Danny Levi helped the Giants spoil the party and return from the South of France with two points in the bag.

that, my friends, is an opening day dub. pic.twitter.com/1zy5O4zm8E

Wintry weather and a French government Covid-control stadium ban on refreshments kept the historic opening night’s attendance lower than expected at just 5,238 at Stade Ernest-Wallon, but on the field the home side could hardly have asked for a better start

Toulouse took little time to score their first points in the top flight with a second-minute try for Matty Russell, who collected a clever Junior Vaivai pass from the tackle to touchdown in the left corner from short range.

A couple of penalties kept Huddersfield on the offensive, with former Warrington Wolves prop Chris Hill and one-time England second row Chris McQueen rampaging up the middle, but a handling mistake by Tui Lolohea put the home team back in control.

When Tony Gigot launched a high ball, winger Ilias Bergal collected and grounded in the right corner, Chris Hankinson on target this time for 10-0 after 20 minutes.

James Cunningham, Matty Russell, Chris Hankinson and Lucas Albert were all making their bows for Toulouse after joining the French club for their first season in Super League.

Huddersfield had four players making their competitive debuts, including the new half-back pairing of Tui Lolohea and Theo Fages. Chris Hill and Danny Levi were also new faces in the pack.

Luke Yates forced his way through the Toulouse line to score beside the posts five minutes later, Oliver Russell adding the conversion, then Yates found Innes Senior on the wing to level the scores.

Centre Wardle looked to have beaten Gigot to a chip into the Toulouse in-goal to score just before half-time, but the video referee disagreed, however, as the hooter blew for half-time, there was no debate over a 30-metre strike by Louis Senior.

At 10-16, some French resistance was going to be necessary in the second half, but Wardle was first to break the line to score on 47 minutes, then Josh Jones was held up under the posts.

Toulouse went further behind with a Russell penalty 10 minutes later and were forced into a lengthy series of goal-line drop-outs as the Giants turned the screw.

Wardle struck for his second, converted from the touchline by Russell, then McQueen and Olly Ashall-Bott crossed to bring up the 40th point and rub more salt in French wounds.

A late consolation try from Guy Armitage saved some blushes for the Olympians but coach Sylvain Houles may have to make some emergency recruits to his depleted squad if any points are to be hoped for from their opening run of matches.

“We started pretty well, but in the first half we just killed ourselves. Our discipline cost us quite a lot…and we didn’t adjust into the second half, and that’s how you learn, I guess.

“The offsides and set restarts let Huddersfield back into the game. Our kicking was poor…and we seemed like we had to do something special every time, and we can’t panic like that.”

“I’m just glad to get the win in the first game of the season. We’re a new group and it’s going to take time to build momentum, but we’ve got a great group and we’re looking forward to the season.

“We knew Toulouse would be really enthusiastic and bring a load of energy, and we had to match that. I thought we started a little bit sloppy, but after that we had a change with Seb and Joe Greenwood, and they kind of lifted the intensity of the game, and we started to get back to how we wanted to play.”

Huddersfield are back on home turf on Saturday, February 19 as they welcome Hull Kingston Rovers to the John Smith’s Stadium (3pm kick-off).

Toulouse now hit the road for their second Super League game the following day, travelling to a Salford Red Devils side aiming to back up their win in Round 1 with another at the AJ Bell Stadium (3pm kick-off).