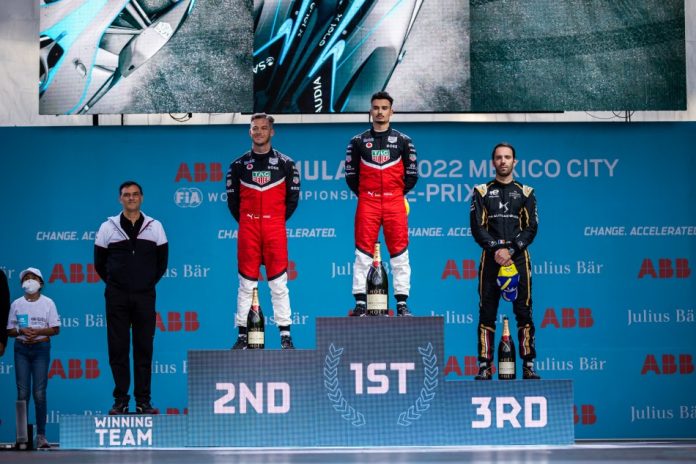 After setting the pace in Mexico in recent years, TAG Heuer Porsche finally got its reward this weekend with a dominant one-two finish.

After setting the pace in Mexico in recent years, TAG Heuer Porsche finally got its reward this weekend with a dominant one-two finish.

TAG Heuer Porsche’s Pascal Wehrlein arrived in Mexico for round three of the 2021/22 ABB FIA Formula E World Championship with unfinished business in the Latin American country. At the Autódromo Hermanos Rodríguez today (12 February), he took care of it in some style.

Three years ago, Wehrlein led the Mexico City ePrix from pole position right up to the final corner, only to cede the advantage literally within sight of the chequered flag and to then be demoted from the podium by a post-race penalty. Last season, the German was disqualified from victory in nearby Puebla due to an infringement. Third time around, he was not to be denied.

From his third career pole – all of them secured in Mexico – Wehrlein fended off a fast-starting Edoardo Mortara at lights-out and proceeded to hold sway until shortly after the first sequence of ATTACK MODE activations, when the ROKiT Venturi Racing man made his move at the end of the start/finish straight to seize the initiative.

As the Porsche pair of Wehrlein and André Lotterer in third focussed on conserving energy, Mortara edged away – with DS Techeetah duo Jean-Éric Vergne and António Félix da Costa coming along to challenge for the podium positions. Having despatched Lotterer in one fell swoop, they set about doing the same to Wehrlein, with the Frenchman successfully repeating the feat a lap later to advance to second.

Approaching mid-distance, Mortara still held what looked to be a reasonably healthy margin, but Vergne – despite grappling with radio communication problems – was hunting the championship leader down. Behind them, however, Porsche’s ‘long game’ strategy was beginning to pay dividends, as Wehrlein and Lotterer – the qualifying lap record-holder in Mexico City heading into the weekend – made short work of fighting their way back to the front of the field.

Thereafter, they sped away into the distance, Lotterer shadowing his team-mate all the way to the chequered flag as the countrymen cemented an historic breakthrough Formula E triumph for the German manufacturer. Not only did their commanding formation finish bring the enthusiastic crowd to its feet, it put both Wehrlein and Porsche’s Mexican demons to bed in emphatic fashion.

Some nine seconds behind them at the chequered flag, Vergne led da Costa across the line to claim third position and the final spot on the podium. The two former champions looked to be slipping down the order as the race progressed, but a late charge enabled them to scythe their way back through. Da Costa’s fourth place was achieved despite contact with both the wall and the rear of Wehrlein’s car, leaving the Portuguese star having to contend with flailing bodywork for a while.

Following a see-saw scrap with a hard-charging Robin Frijns (Envision Racing), earlier leader Mortara ultimately clung on to take the flag fifth – in so doing slightly extending his gap at the summit of the Drivers’ standings – while his Dutch rival found himself having to defend for his life.

Frijns subsequently conceded sixth spot to compatriot Nyck de Vries (Mercedes-EQ), the Diriyah winner taking advantage of other drivers’ issues to regain ground after falling outside of the top ten – and posting fastest lap in the process.

Nissan e.dams’ Sébastien Buemi tallied his first points in seven months courtesy of a strong drive to eighth from down in 18th on the grid, in front of team-mate Maximilian Günther and Avalanche Andretti’s Jake Dennis.

Following an eight-week break, the 2021/22 Formula E campaign will resume with the double-header Rome ePrix on 9/10 April.

“That was really satisfying, with all the history I have here in Mexico it feels amazing to have the first victory for me and the team. I am so grateful for this team, I really love them. The car was amazing, and Andre did an amazing job. Today was our day, so let’s celebrate this evening.

“It was very important for me [to win here], I have raced here a couple of times in the Championship and been close so many times. It was payback this weekend and it feels amazing.”

“Congrats to the team, congrats to Pascal – fantastic result. I was up on energy and had a good opportunity to take the lead, but we worked as a team and I think the strategy played out very well. If I had started in front of him it would have been the same story the other way around, I think from the team perspective it was the right call. We played it cool and showed a strong performance together.

“Its tough [not to get first E-Prix win] but that’s the sport, I should have qualified better and it would have been fine. Its nice for Pascal, he had a win taken away from him last year in Mexico, so karma came back for him.”

“It was an interesting race, I had more energy than Mortara and was looking good for the win, but then my team asked me to change the strategy and I lost a lot of positions all of a sudden. I was able to get it back, but not catch-up with the Porsche. But I am very happy with this podium.

“It has been a tough weekend for me – I had food poisoning yesterday – and I did not feel very well today. But congratulations to the Porsche boys, they did an amazing race, the last time I did a 1-2 was with Andre, so well done to Porsche. Let’s keep pushing to score points in the races and come back in the Championship.”