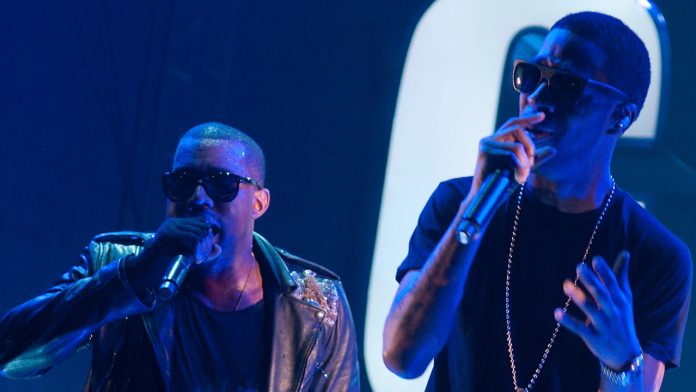 Ye (the artist formerly known as Kanye West) and Kid Cudi have publically fallen out in an online altercation spurred by a post to Ye’s Instagram. Ye—apparently upset over Kid Cudi’s friendship with actor and comedian Pete Davidson (who is currently dating Ye’s ex-wife Kim Kardashian)—posted to Instagram (since deleted) that Cudi “will not be on Donda because he’s friends with you know who,” adding “we all speak in Billie language now.” Cudi responded to the post in the comments, saying “Too bad I don’t wanna be on ur album u fuckin dinosaur hahaha 🤣.” He also responded separately on Twitter, writing: “We talked weeks ago about this. You’re whack for flipping the script and posting this lie just for a look on the internet. You ain’t no friend. BYE.” Ye has since expressed feelings of betrayal, writing “I JUST WANTED MY FRIEND TO HAVE MY BACK THE KNIFE JUST GOES IN DEEPER” on an Instagram post that featured a group photo with Davidson’s face X’d out.

This is not the first time the friends and collaborators have feuded. Back in 2016, Cudi took to Twitter to attack both Ye (then West) and Drake, criticizing their use of multiple songwriters to make their music. Ye, on tour in support of his The Life of Pablo LP, responded from the stage in Tampa: “Don’t never mention ‘Ye name. I birthed you,” adding “I’m so hurt. I feel so disrespected. Kid Cudi, we’re two black men in a racist world. I wore skinny jeans first.” A week later in Houston, Ye backpedaled, saying “Kid Cudi is my brother,” and calling him “the most influential artist of the past 10 years.” The next month, when Drake released “Two Birds, One Stone,” a track aimed at Pusha T and Kid Cudi, Ye was listed in the credits as a writer, composer, and producer.

A year later, in November 2017, Cudi brought Ye out during his show at the Aragon Ballroom in Chicago to perform “Father Stretch My Hands, Pt 1” from The Life of Pablo. It was his first live appearance since November 20, 2016—the final night of his Saint Pablo Tour. The following year, the two released their collaborative album Kids See Ghosts.