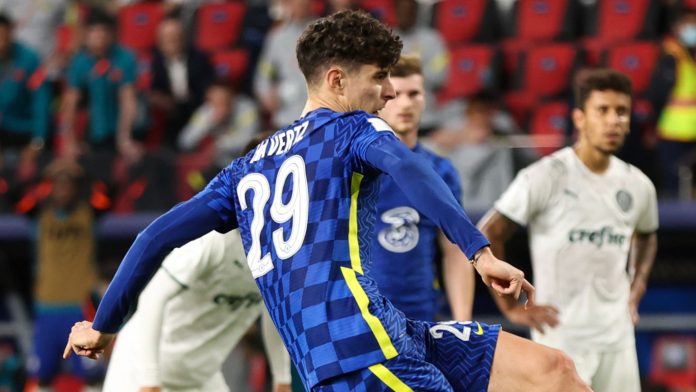 Chelsea won the Club World Cup for the first time after Kai Havertz’s extra-time penalty earned them a gritty 2-1 win over Brazilian side Palmeiras in Abu Dhabi.

Romelu Lukaku’s 10th goal of the season had Chelsea hoping of a quick conclusion in their bid to complete the clean sweep of major global club trophies.

But Palmeiras had other ideas and Raphael Veiga’s penalty sent the clash into extra-time at the Mohammed Bin Zayed Stadium.

The otherwise-flawless Thiago Silva was penalised for handball for Veiga’s spot-kick, in a frustrating moment for the 37-year-old Brazil defender against his compatriots.

But Chelsea were rewarded for refusing to tighten up in the extra 30 minutes and duly succeeded where the Blues had failed in Japan in 2012.

Palmeiras defender Luan conceded the spot-kick that allowed Chelsea to seal their victory – and was then sent off with almost the night’s final act, scything down Havertz as he was through on goal.

The Brazilian club from Sao Paolo produced a fine performance of industry and endeavour in stifling Chelsea, but the Londoners’ superior quality and grit eventually told.

To add to their status as Champions League and European Super Cup holders, Chelsea are now world champions for the first time.

The onlooking Roman Abramovich appeared as nervy as the smattering of Chelsea fans, at one point caught hugging his knees amid the tension of a sultry Abu Dhabi night.

But the billionaire has now overseen Chelsea’s full house of major club titles, since purchasing the club in 2003.

As delirious Blues players danced and hugged in a circle on the pitch, manager Thomas Tuchel was even able to partake in those celebrations, having made it out to Abu Dhabi after Covid-19 self-isolation.

The 16,000 Palmeiras faithful ignited the capacity crowd some two hours before kick-off.

The FIFA pre-match show dampened the atmosphere somewhat as the Brazilians took a breather, but the green-clad revellers were back to non-stop chanting come kick-off.

Callum Hudson-Odoi’s deep cross evaded everyone in the box as a clutch of players tumbled over each other.

Cesar Azpilicueta rose to his feet to find himself in a fine position with Palmeiras ‘keeper Weverton possibly stranded, but the Chelsea captain lost his bearings and the chance evaporated.

Palmeiras talent Dudu whipped over the bar after a smart spinning effort, then spurned a major chance by firing just wide after a quick break.

Mason Mount was then forced to trudge disconsolately out of the contest, in perhaps a recurrence of the leg issue that he had picked up in the 2-1 FA Cup win over Plymouth.

Chelsea’s match-specific system demanded Silva act as playmaker, and his raking balls were often close to bisecting the Brazilians’ defence.

A lack of movement and fluidity ahead though eventually led him to thump in a long-range effort that nearly caught Weverton cold.

The Palmeiras stopper pushed the ball around the post at full stretch, but Chelsea could make nothing happen from the resulting corner.

Chelsea’s sparse fans only managed to make themselves heard for the first time in the opening moments of the second half, such was the Palmeiras dominance in the stands.

The first time Chelsea broke in behind Palmeiras on the flank, the Blues took the lead.

The Blues expected to take control but were quickly pegged back instead, as the previously-flawless Silva was punished for a handball in the area.

Silva handled when battling with Gustavo Gomez for a clearing header, and the penalty was awarded after a VAR check.

Neither side could force any further breakthrough in an edgy end to normal time, and so an extra 30 minutes rolled around.

Chelsea set about trying to win the title without any need for penalties and Christian Pulisic almost forced a second Blues goal.

The USA forward’s cut-back was deflected goalwards, only to loop onto the bar and bounce to safety for the relieved Palmeiras defence.

Just when the tie looked headed for a shootout, however, Chelsea won an extra-time spot-kick instead.

Luan was penalised for blocking a shot with his hand after another VAR review and Havertz kept his cool to fire home in style.

Luan was then sent off to add insult to his personal injury, but the Blues deserved their win in the end, and the chance to complete their trophy cabinet.

“It never stops. We want to keep on winning trophies.

“In the end if you score late you need luck to do it, but we were relentless and we did not stop trying.

“We did not give in. We had the lead then lost it but never stopped. It was deserved but also lucky when you score late.

“The penalty does not look nervous [from Kai Havertz] but for sure he was. You cannot not be nervous in this situation. We trusted the statistics and I’m happy for him.”

On Chelsea winning every trophy available: “I’m a part of it and I’m happy to have the chance. We said before in the dressing room ‘what an opportunity’.

“We all dream to have finals like this. There is no regrets. There are still things to win and it never stops.”

Havertz: I dreamed of this as a kid

“I was nervous [taking the penalty], I have to be honest. It’s a big penalty. It’s just crazy. It was good I kept the nerves. I am very happy.

“I was the third penalty taker but I was the only one left on the pitch.

“My team-mates gave me trust. I dreamed always as a kid of this. This is an amazing feeling for me.”

Chelsea sit third in the Premier League and are next in action in a London derby away at Crystal Palace next Saturday.