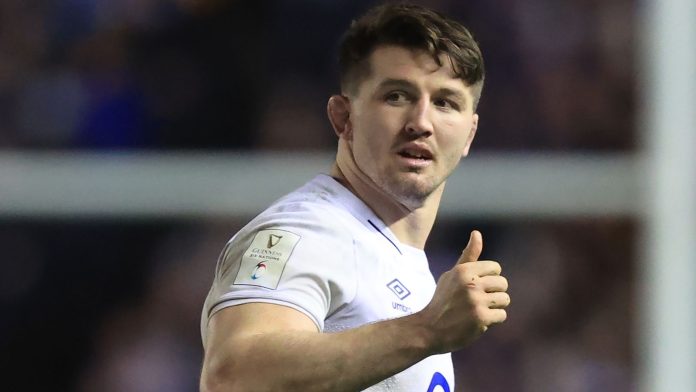 Talking points for Italy vs England in Rome; England have never lost to the Azzurri in the Six Nations; match has a 3pm kick-off at the Stadio Olimpico; France beat Ireland and Wales overcame Scotland on Saturday

We look at some key talking points ahead of England’s encounter with Italy in Rome which concludes round two of the Six Nations.

At the Stadio Olimpico, Eddie Jones team will look to get their Six Nations campaign back on track after a frustrating defeat to Scotland in Edinburgh on the opening weekend.

The team have travelled to Rome with the knowledge they have never lost to their opponents in the competition and Jones has made six personnel and two positional changes for the encounter.

Jack Nowell will start for England for the first time since 2019 on the wing, while Harry Randall is set to earn his third international cap at scrum-half. Elsewhere in the backline, Joe Marchant moves into midfield alongside Henry Slade.

Jamie George replaces Luke Cowan-Dickie at hooker and forms a front-row unit with vice-captain Ellis Genge and Will Stuart. Charlie Ewels is handed a start at lock, as Maro Itoje shifts into the back row alongside Alex Dombrandt.

Off the bench, Ben Youngs could become the joint most-capped England men’s player of all time. The 32-year-old will add to his 113 caps if he takes to the field. Ollie Chessum is in line to make his England debut off the bench.

Scrum-half is a position that Eddie Jones has not tinkered with very much over the course of his tenure as head coach. Jones has often been criticised for limiting his options to just two individuals.

For a large part, Ben Youngs has occupied the starting jersey, however, in Rome, the 32-year-old will be wearing the 21 jersey and Randall starting at nine.

Randall has proved himself to be a livewire for Bristol Bears in the Gallagher Premiership.

“He’s very good in broken play, he’s got a good solid pass on him and his kicking game is improving,” Jones said about the 24-year-old.

As a half-back unit, Randall and Smith have just eight caps between them. They will be bombarded by Italy’s back row all day long; going forwards they will need to be brave and in defence, both must hold their own.

Smith has already proved that he can thrive at Test level and now Randall needs to try and do the same.

One of the other changes Jones has made to England’s XV is the introduction of Nowell on the wing.

The Exeter Chief, who arrived on the field very late on against Scotland, will hopefully have been given licence to roam freely in Italy.

Nowell is always hungry for work and regularly comes off his wing to find gaps, punch holes for himself and create opportunities. Upon naming the 28-year-old in the starting line-up, Jones said Nowell has a “bounce in his step” and is sharper than he has been since 2016.

Following England’s performance at Murrayfield, the head coach pointed towards them not being clinical enough and Nowell always executes at a high level.

Nowell has had a torrid time due to injuries and his energy should invigorate those around him and boost their confidence too.

Italy must maintain intensity for full 80

Whenever England’s head coach was asked about Italy during the week, Jones took the time to praise his counterpart Kieran Crowley and highlight the progress he can bring to Italian rugby.

“Italy are not a team that you can underestimate, you have to play well to beat them,” Jones said. “I’m sure Kieran is going to have them well prepared.

“They’ve got a very good, spirited team and are playing their first game at home, they’ll be wanting to impress the home crowd. It’s going to be a tough old game.”

If Italy want to win their first Six Nations match since 2015, then they will need to buck their trend of playing well for around 60 minutes and then dropping off in the final quarter.

The issue for Crowley’s side is not only linked to their own performance though, as they are likely to be hindered by the strength of England’s bench.

Jones has 409 caps worth of experience to call upon in the latter stages of the match, including a half-back pairing of Ben Youngs and George Ford, Joe Marler and Kyle Sinckler in the front row and the dynamic Sam Simmonds.

In short, England should have another gear to go to and Italy must go with them.

This Test in Rome will mark Tom Curry’s second match leading England as captain, and he will need to keep a cool head and show his leadership credentials.

England are expected to overcome the Azzurri and if they concede early, Curry must rally his troops, ensure they remain calm and play the long game.

A trip to Rome featuring a fired-up Italy, who are desperate to end the conversation around them not meeting the mark in the Six Nations, presents a potentially frustrating outing for England.

The back rower will be flanked by two vice-captains on the field in the form of Henry Slade and Ellis Genge, plus another on the bench, but he must be the figurehead.

Jones has already likened the forward to Richie McCaw and this encounter will be a chance for Curry to prove he has McCaw’s quiet leadership skills, as well as his breakdown and on-field rugby prowess.