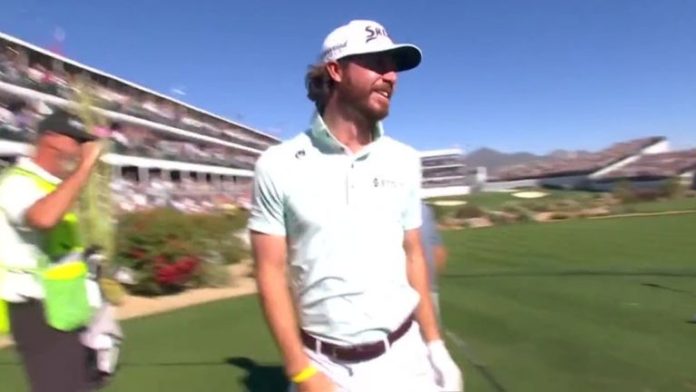 American Sam Ryder makes 10th-ever hole-in-one at the par-three 16th in the tournament’s history and first since Francesco Molinari in 2015; watch the final round from 5pm live on Sky Sports Golf

Sahith Theegala leads defending champion Brooks Koepka by one shot heading into the final round of the WM Phoenix Open, where Sam Ryder prompted scenes of pandemonium with a hole-in-one on the famous par-three 16th at TPC Scottsdale.

PGA Tour rookie Theegala, 24, is a sponsor’s invite but belied his inexperience to overcome a double-bogey at the par-four second and make three birdies in a four-hole stretch from the par-four sixth.

The world No 318 made a bogey at the 11th after narrowly avoiding the water with his second shot before he birdied the 13th and 17th to ensure he retained his overnight lead and reach 14-under par for the tournament.

Four-time major winner Koepka got up and down from a greenside bunker at the 18th to save par and record a three-under 68, which included six birdies and three bogeys, on a low-scoring day.

Scottie Scheffler surged into contention with a faultless nine-under 62 – the lowest round of the week so far – to form part of a four-strong group two shots behind newcomer Theegala.

Joining Scheffler are reigning FedEx Cup champion Patrick Cantlay and Xander Schauffele, after rounds of 68 and 69 respectively, while Talor Gooch birdied his final three holes to join the quartet in a share of third place.

Schauffele, Rio Olympics gold medallist in 2021, had seized the lead on the front nine with a run of four birdies in six holes from the third but he lost his momentum on the back nine after a wayward tee shot at the 11th led to a double-bogey six.

Further down the leaderboard, playing partners world No 1 Jon Rahm and Justin Thomas matched each other for the third consecutive round this week as three-under 68s saw the pair reach eight under.

Ryder produced the highlight of the day at the 16th, known as “The Coliseum”, as his tee shot landed just to the right of the pin on the 124-yard par-three before the ball spun to the left and into the hole.

Fans in the giant grandstands reacted in a frenzy by throwing cans and bottles onto and around the green, leading to about a 15-minute delay as tournament officials cleared up the mess.

The incredible feat was the 10th hole-in-one at the 16th in the tournament’s history and the first since Francesco Molinari in 2015.

“I don’t know how I could pick a hole over this one,” said Ryder, eight strokes behind Theegala after an even-par 71.

Meanwhile, Charley Hoffman, who accused the PGA Tour of not protecting its players and criticised the USGA after a rules issue cost him a penalty stroke on a drop during the second round, sits bottom of the field at five over after an eight-over 79.

Speaking after his third round, Hoffman said: “Not a huge fan of the USGA and how they govern us all the time. I’m making a stance for the USGA to change this.”

Hoffman, a four-time PGA Tour winner, also appeared to sympathise with potential defectors to a proposed Saudi-funded league in a social media post on Friday.

Why is Hoffman furious at the PGA Tour?

“The PGA will be scratching their heads, they’ll be thinking ‘what more do we have to do?’ said Sky Sports reporter Jamie Weir.

“We’ve made these guys feel valued and certainly financially rewarded for their services yet we’re still having to deal with things like this. It smacks of entitlement, it smacks of privilege, and frankly biting the hand that feeds.”

Is Crying Good For You?

‘I Just Killed My Dad’ is Netflix’s latest true-crime series not...

Gangs gain the upper hand in war with Haitian police

The next frontier in the tech battle between the US and...