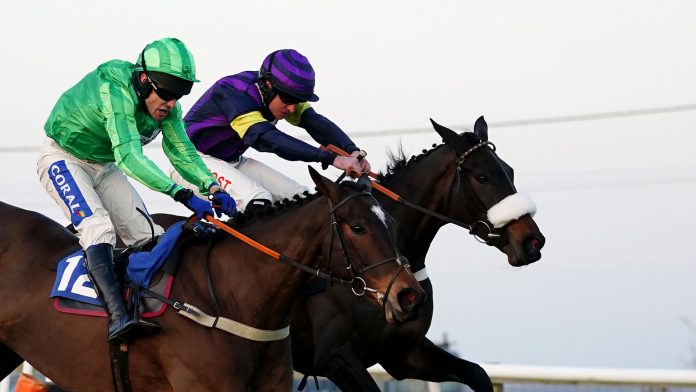 Warren Greatrex’s Abuffalosoldier has Wetherby on his agenda after impressing with a debut hurdles success.

The five-year-old won a bumper at Southwell in December and went on to score again when running for the first time over obstacles, taking an 11-runner novice event at Wincanton on Boxing Day.

Greatrex has entered the gelding for another novice hurdle at Wetherby on Wednesday and hopes his success is just the beginning.

“He’s come out of Wincanton very well,” he said.

“He’s a lovely young horse and that’s the plan to take him there. There are a few other places he could go in the following weeks but if he’s all good and I’m happy with the track, he’ll go to Wetherby.

“He seems very straightforward and I think he’s improving all the time. Obviously he did quite a lot of the donkey work by himself (at Wincanton) and he will probably be better with a lead.

“He’s got everything you want, he’s a lovely, lovely stamp of a horse. He’s got a great mind on him, he stays well and he’s not slow.

“At the moment he ticks a lot of boxes, we’ll go next to Wetherby and if that all goes well then obviously we’ll have to think about what we do after that, but he looks to have a very bright future.”

Abuffalosoldier was sired by Mahler and is owned by the Mahler And The Wailers partnerships, the same connections involved with Edinburgh National winner Bob Mahler, another Greatrex-trained Mahler gelding with a reggae-inspired name.

“He’s been retired (Bob Mahler), so they bought this horse at the beginning of lockdown,” the trainer said.

“He’s done nothing but please us all the way through.

“He just seems to be getting better and better, whatever we saw at Wincanton was just touching the surface, I think there’s plenty more to come.”