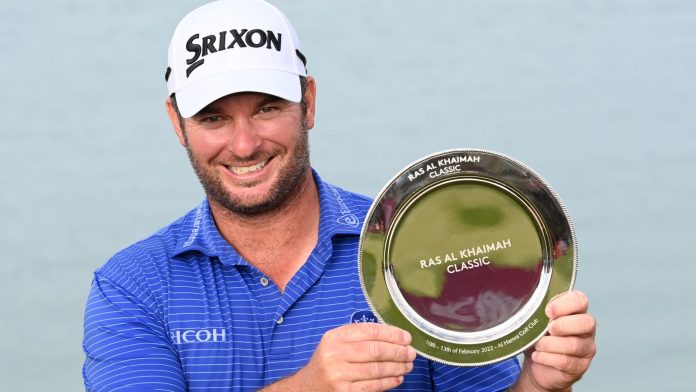 Ryan Fox led by six going into the final round in the United Arab Emirates, and the New Zealander overcame a shaky start at Al Hamra Golf Club to ease to a five-shot win at 22-under par from England’s Ross Fisher in second

Fox led by six going into the final round in the United Arab Emirates, and the New Zealander overcame a shaky start at Al Hamra Golf Club to ease to a five-shot win at 22-under par from England’s Ross Fisher in second.

The victory saw Fox claim a second DP World Tour title in 138 appearances, with his only other win coming at the 2019 ISPS Handa Perth Super 6, which was played with a six-hole knockout final day following a 54-strokeplay round.

Spain’s Pablo Larrazabal had appeared Fox’s most likely contender at the turn, having closed to within three shots, but he was unable to improve his score on the back nine and finished in a three-way tie for third with Germany’s Hurly Long and South African Zander Lombard.

Scotland’s Connor Syme was a shot further back in a tie for sixth with Japan’s Masahiro Kawamura and Poland’s Adrian Meronk.

“Probably relief is the main (emotion),” Fox told Sky Sports. “It was a bit of a struggle today.

“Sleeping on a six-shot lead I did not sleep very well last night and a couple of guys came at me early and I was a bit nervous.

“It was going south pretty quickly and I’m pretty happy I could turn it around and show quite a bit of mental fortitude.

“I had that awful feeling in the pit of my stomach all day but I’m very happy with how I played, a couple of great shots coming down the stretch and it was certainly nice walking up the last with my putter in my hand knowing I had five or six putts or whatever it was for it (the win).”

Fox had missed the cut on the same course last week as he struggled with a back injury, but the Tour’s physios helped him back to full fitness and he also received a putting tip from South Africa’s Shaun Norris at the start of the week which paid massive dividends.

Fox started calmly and looked to be easing to a fourth successive par to start his round when he made a stunning miss from just two feet to bogey the par three.

The 35-year-old immediately hit back with a birdie but another bogey at the sixth gave hope to the chasing pack. Fox managed to move back to even for his round with a birdie at the par-five eighth, but Larrazabal moved within two shots of the lead when he rolled in a 25-foot putt at the 11th.

However, rather than wilting under pressure, Fox holed a 43-foot putt at the 12th to extend his advantage, before following up with another birdie at the 13th.

With a comfortable cushion over the closing holes restored as Larrazabal fell away, Fox finished in style with a birdie at the par-five 18th.

The victory could lift him as high as 118th in the world golf rankings, a significant rise from his current placing of 211th.

It was a strong finish to the week for England’s Fisher, who birdied four of his first eight holes before a bogey at the ninth dented any hopes he had of tracking down Fox.