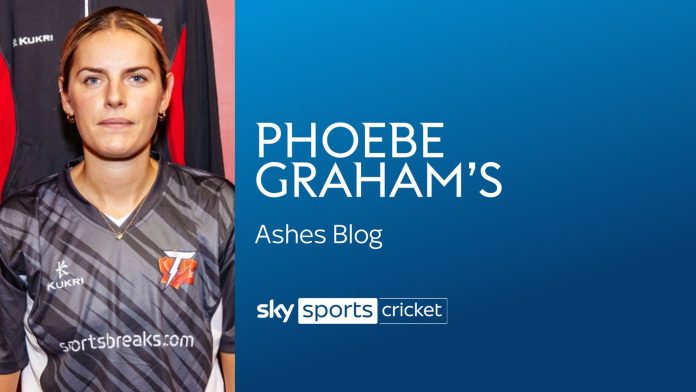 Phoebe Graham says England “have a lot left in the tank” after Ashes defeat but must make brave decisions as they look to successfully defend the 50-over World Cup; watch the tournament live and in full on Sky Sports from March 4; England’s opening game against Australia on March 5

Phoebe Graham says that after a disappointing Ashes campaign, better times lie ahead for England at the Women’s World Cup – if they make brave decisions…

I’m backing our England squad leading into the 50-over World Cup. We are defending champions and with brave selection choices, the best is yet to come.

Yes, we are coming off the back of an Ashes defeat, but you have to remember that England only played four games of cricket with limited preparation beforehand. This squad still has a lot left in the tank.

Throughout the Ashes, Australia made brave decisions.

They dropped their ‘golden girl’ Ellyse Perry for the first T20 so a lot rested on Tahlia McGrath’s shoulders. She took 3-26 and scored 91 not out.

Australia trusted their domestic and selected based on performing players. It also fired up Perry to come back stronger in the Test match and ODIs. Brave decisions at their best.

What’s positive to see is that England have brought England A’s top-performing player Emma Lamb into the World Cup squad and added Lauren Bell as a travelling reserve.

It would have been nice to see Belly selected as she has stepped up on every occasion and taken wickets out in Australia but I’m certain her time will come.

I hope England make brave decisions and give opportunities to performing stars.

Tash Farrant was firing after The Hundred as were Bell and Lamb. Hopefully we can learn from Australia by making brave decisions and using our talent while it is hot.

There is a hell of a lot of talent in that camp and if we are able to string the batting and bowling together it will be an unstoppable unit.

We have two of the world’s best players in Heather Knight and Katherine Brunt.

Their performances in the Ashes Test (Knight’s 168 not out, Katherine’s 5-60) will go down in history. Heather has scored centuries in all three formats of the game and her talent is next level.

Best is yet to come

England showed throughout the Ashes just what dedication, grit and resilience they have.

It was not an easy tour for the players to prepare for and every single one of them should be proud to be out there representing their country.

The batting and bowling has not come together just yet, we are yet to win the ‘must-win’ moments. But we are getting ourselves into winning positions. The Test match was a fine example.

We have the talent, we have the stars, and the best is yet to come for this England team.

Good luck girls, I’m behind every single one of you!