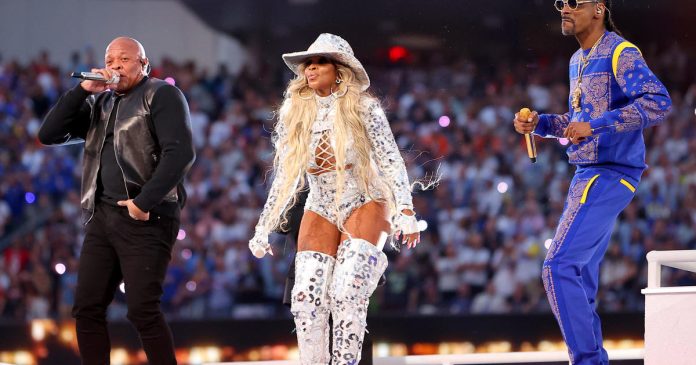 Sunday’s Super Bowl LVI saw a major showdown between the Los Angeles Rams and the Cincinnati Bengals. But while players retreated after the 2nd quarter with the Rams leading, the show only got more spectacular — with ’90s legends like Snoop Dogg, Eminem, Dr. Dre and Mary J Blige taking the stage during the halftime performance.

They halftime stars weren’t the only musical act Sunday night, with Jhene Aiko opening the game with her rendition of “America the Beautiful,” followed by a country star Mickey Guyton’s soulful version of “The Star Spangled Banner.”

The Pepsi-sponsored halftime show began with the iconic hit from Snoop Dogg and Dr. Dre, “The Next Episode.” The artists danced across nondescript all-white set built to resemble a strip mall.

50 Cent made a surprise appearance at the show, performing “In da Club,” while partially hanging upside down for the beginning of the show before being joined by dancers.

Mary J. Blige joined the stage with “Family Affair,” dancing in shining thigh-high boots covered in mirrors and silver glitter before transitioning into “No More Drama.”

Eminem’s arrival on stage was announced with the shattering of one of the all-white walls, before the speakers blasted the entrance to his chart topping hit “Lose Yourself,” accompanied by Anderson Paak on the drums.

The collection of artists finished the epic performance with Snoop Dogg and Dr. Dre ending with “Still Dre,” with the ensemble performers joining the two on stage.

The show notably focused and celebrated Black culture, a focus many Twitter users highlighted given the NFL’s historically-criticized record on race and social justice. According to the Los Angeles Times, the show was a product of the NFL’s high profile deal with mogul and rapper Jay-Z. The NFL has promised it would take race more seriously and make an effort to “strengthen community through music.”

Uttar Pradesh to set up Ecotourism Board