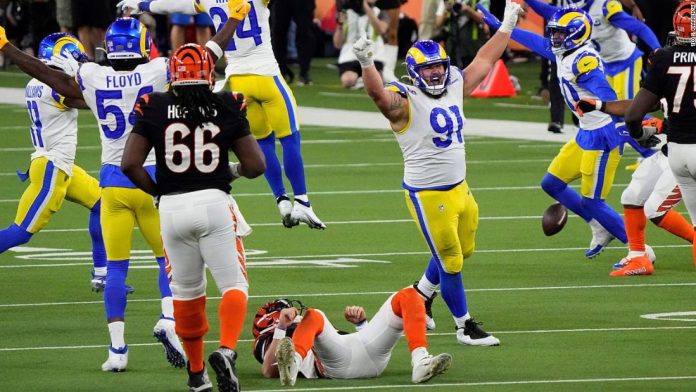 You had the money to hire Zendaya, Matthew McConaughey, Morgan Freeman, Dolly Parton, Kevin Hart, Idris Elba, and Lindsay Lohan? Cool. Now give them something memorable to do, other than just serving as a mouthpiece for the product.
On the flip side, Larry David was used brilliantly as a curmudgeon through history in a spot for a product it was hard to imagine him actually endorsing. Seriously, crypto? Pretty, pretty bad.
Those were just a few of the takeaways absorbing the usual smorgasbord of football, ads, patriotism and self-promotion, not necessarily in that order. And while Covid was part of the day (including an ad for a home-testing kit), the game felt closer to normal.
So, who scored, and who fumbled, in making the most of their exposure during the big game? Here’s a by-no-means-comprehensive breakdown of highlights and lowlights:
The NFL: Another down-to-the-wire game in a playoff season filled with them.
The halftime show: Setting everything else aside, a technical and logistical triumph given the dizzying assortment of moving parts. The larger context of the NFL, race and coach Brian Flores’ recent lawsuit — a topic NBC addressed during the pregame coverage but conspicuously ignored during the game — is a much longer conversation.
Movie theaters: After two painful years during the pandemic, the cumulative message of ads for upcoming hoped-for blockbusters — “Jurassic Park: Dominion,” Jordan Peele’s “Nope,” and throw in “Doctor Strange in the Multiverse of Madness” during the pregame show — is come share these movies with crowds.
Streaming: One challenge for theaters is that there’s plenty to watch at home, as Netflix demonstrated with its star-studded promo for its roster of movies, joined by Amazon’s “The Lord of the Rings” prequel and Marvel’s “Moon Knight” for Disney+, which looked as splashy as a big-screen experience.
Amazon: The idea of an ad featuring celebrity couple Scarlett Johansson and Colin Jost could have gone wrong a dozen different ways, but this one about what might happen if Alexa could read minds had it all — clever, genuinely funny, even kind of adorable.
Expedia: An ad with Ewan McGregor — highlighting the benefits of spending on travel experiences over “stuff” — certainly captured what many have been missing over the last two pandemic-stricken years in understated fashion.
Google: It’s tough to do an ad that uplifts while simultaneously pushing a product, but its spot for a new technology that improves photos of darker-skinned people managed it, capped off by the tagline “Everybody deserves to be seen as they truly are.”
Al Michaels: The best thing you can say about a broadcasting team is not getting in the way of the game or ridiculously hyping it, and Michaels and Cris Collinsworth got that right. But as this telecast happened to come during the Winter Olympics — 42 years after Michaels’ famous “Miracle on Ice” call at Lake Placid — it felt like an exclamation point on his remarkable longevity as a play-by-play man. “The Rams were built to win the Super Bowl, and they have sealed the deal,” Michaels said once it was decided.
Chevy Silverado: The rare reunion that worked, with a tagline really drove home this “The Sopranos”-inspired spot featuring TV siblings Jamie Lynn-Sigler and Robert Iler: “A whole new truck for a whole new generation.”
Toyota: The auto maker delivered a mini movie about paralympic champion Brian McKeever and his brother, a nifty pairing of heart-tugging uplift to coincide with the Olympics, and balanced that with a humorous keeping-up-with-the-Joneses ad.
Etrade: Nobody ever went wrong with talking babies.
Verizon: Tapping Jim Carrey in his “The Cable Guy” persona represented a very savvy blend of talent, nostalgia and product.
Los Angeles tourism: An 80-plus-degree day in February, with all those stereotypical cutaway shots of the beach, Griffith Park Observatory and movie stars? Sure, it’s portrayed as a decadent Babylon hellscape on Fox News, but this airbrushed version still looked like a great place to visit.

See the celebrity section above.
Beer ads: Usually, beer ads are among the highlights of the Super Bowl. But most of these were just plain weird.
Electric-car ads: There were too many of them, and most seemed to be trying too hard, with the notable exception of BMW’s spot featuring Arnold Schwarzenegger and Salma Hayek as Zeus and Hera, which at least had an organic electric tie-in.
Movie theaters: After two painful years during the pandemic, the cumulative message of ads for upcoming hoped-for blockbusters — “Jurassic Park: Dominion,” Jordan Peele’s “Nope,” and throw in “Doctor Strange in the Multiverse of Madness” during the pregame show — is come share these movies with crowds. But there were relatively few of them, in what could have been a much bigger push for the spring summer movie-going season.
Dwayne Johnson: While it was nice to see what looked like his audition to replace ring announcer Michael Buffer introducing the game, it felt A) like he might finally be taking acting tips from Vin Diesel and B) as if the star is a trifle overexposed.
Coinbase: OK, get the idea of flashing the QR code. But that went on so long it was just plain irritating.
Carvana: An annoying woman who can’t stop talking about Carvana isn’t a great selling point for anything, much less Carvana.
Rocket Mortgage: Enlisting Barbie and He-Man to help sell (dream) houses? Cute, but nah.
Disney+: That brand spot with Awkwafina would have been way more effective if it was just an ad actually showing some of that content. Whoever came up with that idea was the wrong kind of goat.
Irish Spring: How often does a soap ad creep people out? Because this one did.
Pringles: Since when is getting the can stuck on your wrist a selling point?
“Austin Powers” for General Motors, “Community” for Planters, “Scrubs” for T-Mobile: Instead of getting together to push cars, peanuts and Internet access, why couldn’t they just do a Zoom reunion like everyone else?

Is Eurovision coming to your city next year? UK host shortlist revealed

Han Solo’s blaster from Star Wars expected to fetch up to $500,000 at auction