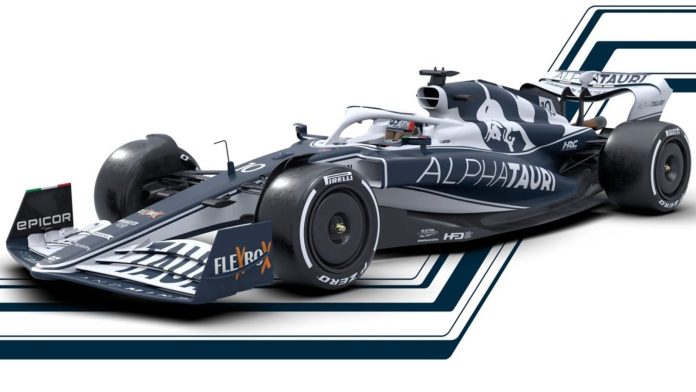 “I think we’ve managed to deliver something very special.”‘ AlphaTauri become fifth team to reveal a glimpse of their 2022 car as they bid to continue momentum for F1’s rules revolution; Team’s AT03 will be driven by Pierre Gasly and Yuki Tsunoda this year

AlphaTauri have delivered a Valentine’s Day treat with the first images of their sleek new car for the 2022 Formula 1 season.

Revealing a revised blue and white livery as they kickstarted their campaign with a digital launch and video, AlphaTauri will hope the AT03 builds on a very promising 2021 this year, the first of the sport’s new era.

Red Bull’s sister team have retained Pierre Gasly and Yuki Tsunoda for 2022’s rules revolution, which has mandated the new-look cars we have seen this launch season.

AlphaTauri, who were formerly known as Toro Rosso before a name change in 2020 to push the Red Bull-owned fashion brand, finished sixth in the championship last season, although their car – particularly in the hands of Gasly – was regularly a top-10 contender.

“This year sees a huge change to the car as, due to the new regulations, the look and design is completely different, so the team has had to start from a clean sheet of paper,” said Gasly.

“We won’t know the true performance of the AT03 until we get it out on track at pre-season testing in Barcelona but so far, I think it looks great and I am very excited to get this new season started.”

Team boss Franz Tost added: “I am excited to finally reveal what our 2022 Formula 1 car will look like.

“It is a completely new era for F1 and we hope that this package will be very strong, following last year’s success.

“Once again, we have worked closely with AlphaTauri to launch our new car and I think we’ve managed to deliver something very special.”

AlphaTauri are the fifth team to provide a glimpse of their look for 2022, although so far Aston Martin and McLaren have revealed their “real” cars with a physical launch. AlphaTauri are one of many teams who are set to reveal their cars for the first time in the flesh before pre-season testing begins on February 23.

It is a crunch year particularly for Tsunoda, who showed flashes of raw speed as a rookie but struggled to match Gasly’s consistency.