Home Culture The anatomy of a romantic comedy 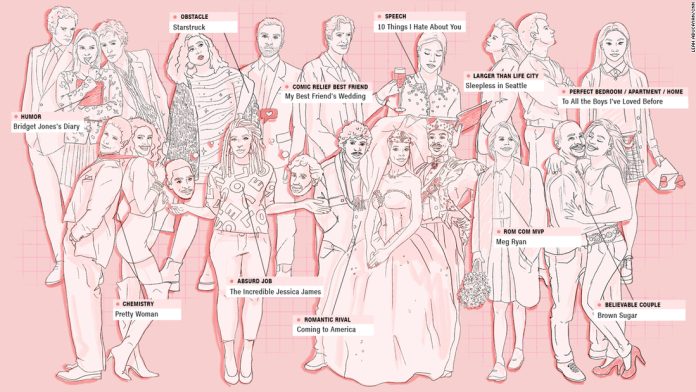 Though often ridiculed, or dismissed as “chick flicks,” these movies appeal to something we all crave: love. To watch these movies is to be charmed — don’t we all, on some level, want to believe in a happy ending? That everything will work out, that everyone is worthy of love?
The rom-com is a genre that has existed for decades, since the very beginning of film. But, like any genre, it has had its duds; films that ring hollow, shallow depictions of one of the most beautiful aspects of life. In honor of Valentine’s Day, and a celebration of love, CNN pondered that eternal question: What makes a romantic comedy click?
We picked and prodded, we studied and surveyed. This is what we found.
“Pretty Woman” (1990)
Together, Richard Gere and Julia Roberts hum synchronously; even their chemistry has chemistry, were it possible. Gere reportedly refused the role initially, but he was eventually talked into it by Roberts — her charm was apparently irresistible, and it spills onto the screen. Who could deny Roberts’ Vivian? She melts both the icy Gere and the audience. The tension between them crackles; the improvised scene when Gere snaps a necklace box shut shows an easy playfulness between the two. Good chemistry can’t be manufactured, but audiences will immediately know if it’s not there. Lucky for us, Gere and Roberts swim in it.

“Brown Sugar” (2002)
Childhood best friends make the most believable couples, and nothing exhibits that more than “Brown Sugar.” Sanaa Lathan’s Sidney is a passionate hip-hop journalist and Taye Diggs’ Dre an idealistic talent scout for a record company. Their love is a playful one, and though he’s with another woman, they are experts in each other the way only long time friends can be. At a bridal shower, Sidney knows more about Dre than his betrothed, an uncomfortable moment that shows how skewed the situation is. It’s not just the script: Lathan and Diggs sell the deep friendship in their mutual casual manner — a nonchalant hand on a shoulder, a secret smile. The couple isn’t just believable, we believe in them. It’s what makes the movie, and any good rom-com, work.

Darryl (Eriq La Salle), “Coming to America” (1988)
Every rom-com needs a romantic rival — a person at whom we can joyously jeer while rooting for the main couple. Of course, sometimes this trope is slightly averted, like in “You’ve Got Mail,” where Tom Hanks seamlessly takes on the role of both love rival and interest. Nevertheless, as exhibited by “Coming to America,” to appreciate the goodness of Prince Akeem (Eddie Murphy), we must have the counterweight of Darryl (Eriq La Salle). Victory tastes sweetest when it’s fought for, and the rivals make it a battle.
“Starstruck” (2021)
When Jessie (Rose Matafeo) gets on that bus to the airport, she is going home, far away from the arms of Tom (Nikesh Patel). The obstacles that plague this couple are endless, and a product of the different worlds they inhabit: His glitzy movie star lifestyle clashes with her broke, odd-job existence. Over the show’s first season, the audience sees the way the couple is held back both externally and internally, their subtle relationship insecurities revealed slowly across six episodes. Will they actually get together? There are moments where we’re unsure. But, in the end, they do — a rekindling made all the more fiery by the work it took to get there.

George (Rupert Everett), “My Best Friend’s Wedding” (1997)
Were it not for the charming George, deliciously portrayed by Rupert Everett, Julia Roberts’ Julianne would be completely unsympathetic, the villain of her own story, a selfish conwoman trying to break up an innocent couple. Here is a companion so willing to meet his friend at her most deranged that he pretends to be her extremely eager fiancé. He may be miffed at Julianne for dragging him into her mess, but he goes along with the facade and takes it to the nth degree. True, George fills the stereotypical “Gay Best Friend” role, and faking heterosexuality for much of the film is the punchline to most of his jokes. But Everett elevates the role to nearly run away with the film.
See also: Judy Greer in “27 Dresses,” Kathryn Hahn in “How to Lose a Guy in 10 Days,” DeWanda Wise in “Someone Great”
“Bridget Jones’s Diary” (2001)
If romance is the beating heart of a film, comedy is every other organ that supports it. It’s right there in the genre’s name, and comedy is essential to a romantic film’s success — audiences want to be charmed, not reminded of their own relationship woes.
A rom-com heroine who falls flat as often as she falls in love, Bridget Jones is endearingly embarrassing. The unlucky-in-love Brit wraps herself up in bed comforters to down a pint of Ben & Jerry’s, sings karaoke poorly but wholeheartedly, and generally feels uncomfortable in her own skin — that’s an everywoman audiences can relate to. Though they may giggle at her pratfalls, they see themselves in her, too. And because her relatable failures are stretched to a cinematic degree, it’s funny and not heartbreaking — it’s likely that few viewers have ever been left to fend for themselves at a garden party dressed like a Playboy bunny.

“The Incredible Jessica James” (2017)
A great rom-com transcends the bounds of our reality by casting its protagonists in roles that a.) allow them to purchase enviably spacious, well-furnished homes and b.) often introduce them to their love interest. Take the three stars of “The Incredible Jessica James” — LaKeith Stanfield plays a man who designs wooden phone cases for a living. Jessica Williams’ titular character works with a children’s theater, and Chris O’Dowd developed an app that texts users’ parents for them. The men, especially, do well for themselves.
These jobs do not exist, or if they do, they are available only to the very wealthy (with the exception of a children’s theater staffer — that’s real, if typically low-paying). And this is one of the great powers of a sharp rom-com: It exists in a world similar to our own, but fantastical, too — one where you can date a techbro in New York City who’s actually tolerable.
“10 Things I Hate About You” (1999)
The speech scene in a rom-com is a common one, but here it is given the Shakespearan treatment. Taken by itself, Kat’s (Julia Stiles) poem about Patrick (Heath Ledger) is almost saccharine, an edge some rom-com speeches teeter. But when Stiles’ voice cracks and eyes water while reading it aloud, there is nothing cheesy about the moment. “But mostly I hate the way I don’t hate you, Not even close, Not even a little bit, Not even at all,” she recites, and the camera switches to Ledger’s anguished gaze. It’s a pain the audience feels, too.

“To All the Boys I’ve Loved Before” (2018)
Lara Jean’s bedroom, like those of most teens, is often cluttered with clothes, her desk overflowing with books and beauty products and the general paraphernalia of a teenage girl with a tendency to swoon. But her room is also painted a divine turquoise with a mural of blossoming branches. It contrasts perfectly with her pale pink bedspread and magenta throw. For a high schooler, she certainly can decorate.
See also: Mia Thermopolis’s converted fire house in “The Princess Diaries,” complete with a fireman’s pole for easy exits.

“Sleepless in Seattle” (1993)
New York City tends to be a mainstay of a rom-com, but here Nora Ephron focuses on the Pacific Northwest as a backdrop to Tom Hanks and Meg Ryan’s love. Though other cities are featured in the movie, none are portrayed as elegantly as Seattle. There’s the oysters, Pike Place Market, and so, so much water — the beach, the lake, the houseboat. Here, Seattle’s gorgeous blues replace the usual generic skyscraper-filled city, and to great effect. When Hanks gazes out to the sea from his houseboat, the lights sparkling off the water’s surface, the magnitude of his grief is palpable. It’s as deep as the water beneath him.

Meg Ryan (in everything)
When all else fails, cast Meg Ryan. Her effusive charisma, sharp wit and gusty takes on lovesick women are the pinnacle of the genre. To use our aforementioned “Sleepless in Seattle” example, who else could have sold a burgeoning romance based solely on the sound of someone’s voice over the radio? Who else could have made that diner scene in “When Harry Met Sally” so charming? Or believably fall in love with a time-traveling 19th century duke in “Kate & Leopold”? Her very being elevates even the most mundane rom-com into authenticity. Whatever love story she sells, we want in.