Home Sport Ronaldo drought one of many problems for Man Utd 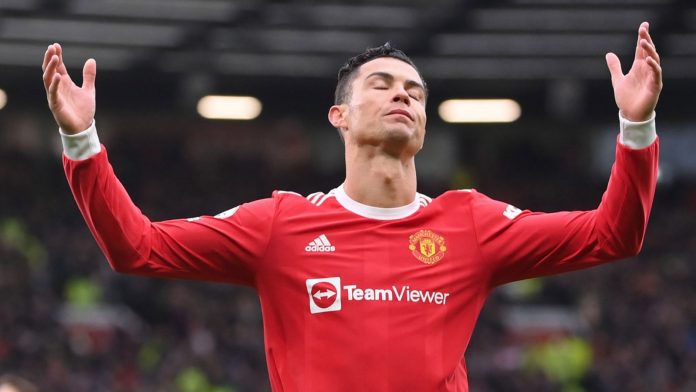 Cristiano Ronaldo tilted his head towards the sky and threw his arms up in frustration as Southampton’s Romain Perraud cleared his low effort off the line during Saturday’s 1-1 draw at Old Trafford.

The pained reactions are becoming a familiar sight. Ronaldo scored 14 times in the first half of the campaign but his failure to find the net against Saints took him to six games without a goal. It is his longest drought at club level since the 2008/09 campaign.

A six-game barren run would not be much cause for alarm in most cases but Ronaldo is different. The 37-year-old has set himself extraordinarily high standards having scored 688 goals in 923 club games. He is subjected to more scrutiny than most.

His drought in numbers

Since his last goal, a close-range finish in the 3-1 win over Burnley on December 30, Ronaldo has played 537 minutes in all competitions without scoring, attempting 37 shots on goal but only hitting the target with seven of them.

Ten of those shots came during Manchester United’s embarrassing FA Cup exit against Middlesbrough, when he dragged an early penalty wide, setting the tone for a wasteful display.

Man Utd 0-1 Wolves, Jan 3 – Stood in as captain but failed to make an impact on the game, seeing a goal ruled out for offside before Joao Moutinho’s winner.

Brentford 1-3 Man Utd, Jan 19 – Had a hand in United’s second goal but reacted furiously after being substituted with Man Utd 2-0 up in the second half.

Man Utd 1-0 West Ham, Jan 22 – Involved in the build-up to Marcus Rashford’s 90th-minute winner but endured a frustrating afternoon otherwise, missing a good headed chance from a Bruno Fernandes cross in the first half.

Man Utd 1-1 Middlesbrough (7-8 on pens), Feb 4 – Scored his penalty in the shootout but missed from the spot in normal time and failed to find the net despite having 10 efforts on goal.

Burnley 1-1 Man Utd, Feb 8 – Dropped to the bench and headed over from his only chance in the second half before storming straight down the tunnel at full-time.

Man Utd 1-1 So’ton, Feb 12 – Failed to convert after rounding Fraser Forster in the first half and had a goal ruled out by VAR for being one of several players in an offside position.

United managed to win Premier League meetings with Brentford and West Ham in spite of Ronaldo’s struggles, but four of the six games in which he has failed to score have ended as defeats or draws.

Ralf Rangnick has pointed out that Ronaldo is not solely to blame for United’s scoring issues – “it is not only about Cristiano Ronaldo,” he said last week – and there can be no arguing there.

FREE TO WATCH: Highlights from Manchester United’s 1-1 draw with Southampton

But it is also true that Ronaldo has had more shots than anyone else in United’s recent matches. Instances of petulance against Brentford and Burnley have only increased the focus on him.

Has his level dipped?

The questions over how Ronaldo would fit into Rangnick’s high-pressing approach began before his appointment was even confirmed but it is worth remembering he scored four times in his first five appearances following the interim manager’s arrival.

“You always have to adapt your style to the players you have available, not vice versa,” said Rangnick after watching Ronaldo score twice in the 3-2 win over Arsenal in his first game in charge.

The early signs were encouraging but the same questions have resurfaced as United’s season threatens to slip away.

Ronaldo’s angry reaction to being substituted against Brentford was a not-so-subtle hint of his unhappiness with the man in the dugout and there was another when he stormed down the tunnel after appearing from the bench in last week’s 1-1 draw with Burnley.

Interestingly, though, the statistics do not point to much of a drop-off in Ronaldo’s overall output since Rangnick’s appointment.

In fact, he is averaging more touches than he was earlier in the season, including more in the opposition box, and while his scoring rate is slightly lower, his shot conversion rate of 11.1 per cent is not far off what it was in the first half of the campaign.

Ronaldo’s goalscoring start to life under Rangnick shows his recent struggles are not solely down to the change of manager and the numbers suggest he has in fact performed at roughly the same level – despite his recent barren run in front of goal.

One issue with Ronaldo, particularly at this stage of his career, is that when he is not scoring, he isn’t offering much else.

Ralph Hasenhuttl’s candid assessment of United’s shortcomings – “it is not a big secret that when they lose the ball, the reverse gears are not always the best from everybody,” he said on Saturday – was therefore automatically linked to him.

Ronaldo’s extraordinary goalscoring ability has long exempted him from the same off-the-ball expectations as others but Hasenhuttl’s comments only add to the recent scrutiny of him.

Ronaldo has never been one to hound defenders and cover every blade of grass so it is no great surprise that he ranks bottom among United forwards this season in terms of tackles, interceptions, recoveries and distance covered per 90 minutes.

But he is not the only attacking player at Manchester United making a modest contribution in those areas.

Ronaldo has actually averaged more sprints per 90 minutes than both Edinson Cavani and the suspended Mason Greenwood this season while Rashford’s numbers show room for improvement too.

The England forward made a key contribution against Southampton when he provided the cross for Jadon Sancho’s opener but he was also guilty of failing to track back in the build-up to Che Adams’ equaliser early in the second half.

It was a reminder that while Ronaldo may not be fulfilling Rangnick’s off-the-ball demands, he is not alone.

Ronaldo’s goal drought is a problem for United which raises questions of his future at the club, but he remains their top scorer by a considerable margin this season and interim boss Rangnick has bigger issues in other departments.

The Southampton game was the third in a row in which United have taken a first-half lead only to squander it in the second period and that’s not just down to a failure to convert chances.

There is a long-standing flakiness and the statistics prove it.

Only Newcastle, Burnley, Leeds and Southampton have dropped more points from winning positions this season. United’s total of 13 is already higher than their total across the whole of the last campaign.

Rangnick has admitted United’s fitness levels are not where they need to be in order to press opponents effectively for full matches and he has also bemoaned a “loss of composure” when it comes to decision-making in all areas of the pitch.

That loss of composure has been seen in Ronaldo’s wayward finishing recently but also in defence, where Harry Maguire’s poor form is creating instability from back to front.

United’s back four have not been helped by a lack of defensive discipline at the top of the pitch but the side’s issues in central midfield are just as problematic. Paul Pogba has returned from injury but United are still struggling to control games with any consistency.

Ronaldo’s goals papered over those cracks in the first half of the season but his failure to find the net in recent weeks has left United with nowhere to hide. Until their broader issues are solved, they will struggle to make meaningful progress – even if Ronaldo does rediscover his scoring touch.