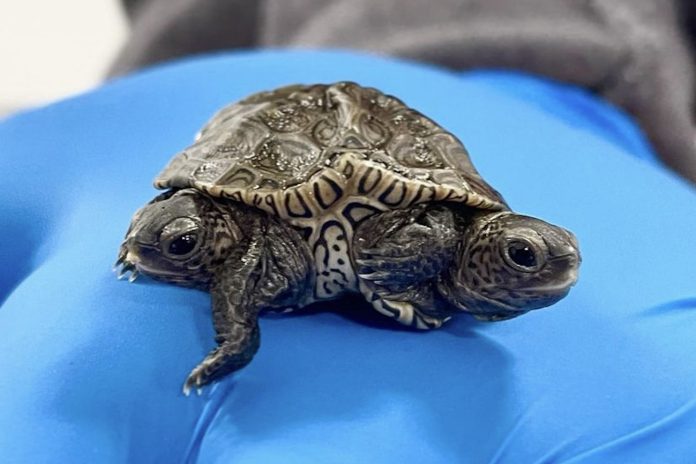 What has two heads and six legs? An adorable diamondback terrapin baby turtle found in Barnstable, Massachusetts. The hatchling was discovered by the Barnstable Department of Natural Resources after it hatched this past fall. They run a head start program that protects the endangered terrapin turtle — the only North American turtle species that lives in brackish water, which is less salty than sea water.

The diamondback terrapin became vulnerable to extinction due to pet trading and human consumption over the last century (they were once commonly eaten in soup). The head start program finds nests vulnerable to predators or weather and keeps the turtle hatchlings in captivity for the first year to aid their survival.

While checking on one of these endangered nests, the Barnstable Department of Natural Resources found the two-headed animal and brought it to the Birdsey Cape Wildlife Center.

“We were as shocked as everybody else was because bicephaly does occur in the wild but it doesn’t usually look like this in turtles,” says Zak Mertz, executive director of the Birdsey Cape Wildlife Center. “Since they are a threatened species, it is even more interesting and fascinating.”

Bicephaly occurs when an animal has two heads. This can result from genetic or environmental factors that arise during the embryo’s development. Normally the embryo splits resulting in identical twins, but in cases of bicephaly the embryo only partially splits. In humans this is referred to as conjoined twins. Studies have found this to be a rare occurrence estimated at one in 50,000 to 100,000 births.

Two-headed turtles usually have only four legs with some deformities in the middle, Mertz explains. (The Birdsey Cape Wildlife Center team refers to this odds-defying turtle in the plural form.) “But our guys have six legs, two heads with full motor function. It was a serendipitous, happy circumstance for them because they are oriented in a way that they are thriving,” he says.

Even though Mertz calls the turtles “guys,” their gender is unknown. “Terrapins in general don’t reach sexual maturity until almost 10 years old,” says Priya Patel, a veterinarian who serves as the center’s medical director.

The reptiles are slightly underweight for their age and are about the size of a silver dollar. Out of the two, Patel isn’t certain who controls which legs since they move synchronously at times.

To ensure that the creatures have a good quality of life and can survive on their own in the wild, the staff has performed several tests to examine their organs.

During a barium study, the turtles ingested a radiopaque material that illuminated their separate digestive tracks on an X-ray. “We could tell that the right side has a little bit more of a developed GI system,” Patel says. “On the left side, you couldn’t really see a defined path, but it was still there.” Although the turtles have separate digestive systems, they share one outflow path, also known as a cloaca. Patel doesn’t know if one side gains nutrients when the other side eats, or how their circulation overlaps.

After a CT scan, they learned that the turtles have separate spines that fuse down by the pelvis, and possibly their own sets of lungs and hearts

Crawling Into an Uncertain Future

Now, the turtles must join forces in order to survive. “If you’re not working together, you’re not going to be able to swim in the direction to get food,” Mertz says. “If one goes down, and the other one’s breathing, they have to work together because they have two sets of lungs.” He cautions that some bicephalic turtles have drowned each other. But so far, the turtles seem to be cooperating and growing at the same rate.

On whether genetic or environmental factors caused the turtle to have two heads: “We’ve had that question a lot but we really don’t know,” says Mertz. The other hatchlings that were born at the same time did not present any unusual characteristics. So this case of bicephaly is “just a one-off anomaly,” Patel says.

The turtles have received plenty of attention from the public, and even made it into this year’s edition of Ripley’s Believe It Or Not! They have also received names: “As a joke one of our staff called them Mary-Kate and Ashley,” Mertz says.

He explains that it’s hard to decide whether to name wild animals since they should remain, well, wild. But providing animals with a name helps people to learn more about them and the issues they may encounter. “Our big message for folks is that we want to protect these turtles — they really need their habitat protected,” says Mertz.

Normally, the center keeps hatchlings until springtime. If these unique reptiles continue to thrive, they might consider releasing them back into the wild. Until then, “we’re really excited to keep learning about the turtles,” Mertz says.