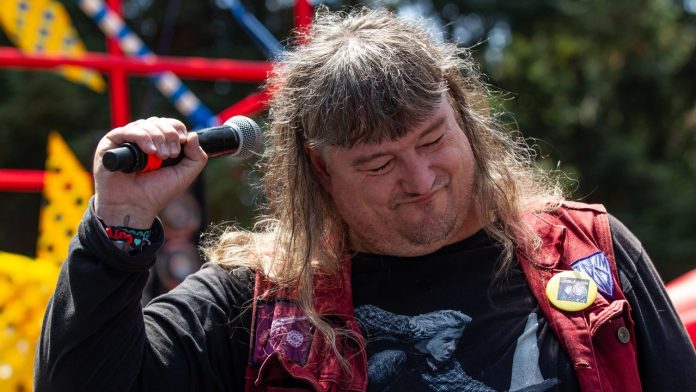 King Louie Bankston, the prolific rock’n’roll artist who was a member of the Exploding Hearts, died on Sunday night (February 13). His mother confirmed the news to Pitchfork. Bankston recorded with multiple bands and was an institution in the Memphis and New Orleans punk scenes. His bands included the Royal Pendletons, Persuaders, Missing Monuments, and the group Bad Times with Jay Reatard and Eric Oblivian. He was 49 years old.

Bankston grew up and lived most of his life just outside of New Orleans in Harahan, Louisiana. His family ran a hardware store in town, and when young Louie became interested in skateboarding as a middle schooler, the business expanded to become a skate shop. He said that skateboard culture of the late 1980s heavily influenced his taste in music. “The more I became a skater and it became my lifestyle, the more I realized I wanted to play music,” he told The Times-Picayune in 2011. His early bands included Intelligenitals, Lame Ones, and Clickems.

In the ’90s, in addition to playing in the Persuaders, Bankston co-founded the Royal Pendletons. Their first record, 1995’s Smokin’ EP, was mixed by Alex Chilton and released by Goner Records. The debut album, Oh Yeah, Baby, produced by Chilton, came out in 1998. Bankston further cemented himself as a central figure of the Memphis punk scene with the release of Bad Times’ sole self-titled album in 2001. The project was fleeting, as the album was the result of a single practice session in 1998.

At the start of the 2000s, Bankston moved to Portland to work with his band 10-4 Backdoor. While there, he met Adam Cox of the band Spider Babies on the street. The two were familiar with each other’s work, and Cox shared a spray-painted CD of the Exploding Hearts’ first demo. Bankston called Cox and insisted on singing him a song he wrote that was rejected by his Royal Pendletons bandmates. Cox loved what he heard and invited him to join the band. “I sang ‘I’m a Pretender’ to Alex Chilton before I left for Portland, Oregon, and he looked me straight in the face and said, ‘Louie, you just wrote a hit song,’” Bankston recalled in 2013.

Bankston and Cox’s friendships developed into a songwriting partnership, and many of the songs they co-wrote made their way onto the Exploding Hearts’ sole album, 2003’s Guitar Romantic. Shortly after the album was released, Bankston departed the band. He cited the band’s decision to hire a manager and get serious about pursuing a career in music as his reason for leaving.

“I don’t ever want to be in a position where I’m playing music for a living,” Bankston said. “I like working a day job, and if I can make money on music, that’s great…. I wanted to look at myself as the person who was going to play roadhouses when he’s 60. That’s what I wanted then and that’s what I want now.”