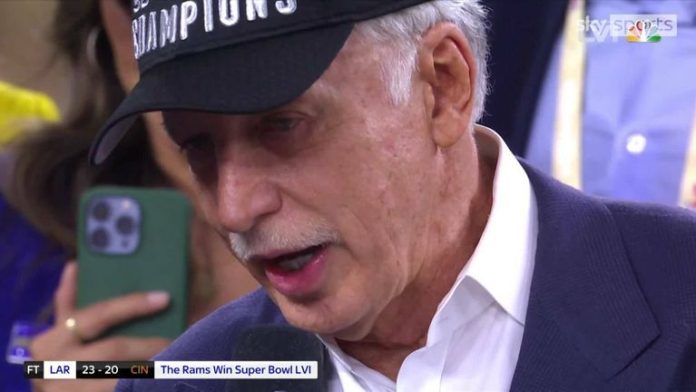 The Los Angeles Rams won their second Super Bowl in franchise history, but a first under Stan Kroenke’s ownership, with a 23-20 victory over the Cincinnati Bengals; Arsenal have no realistic chance of winning silverware this season, but they’re contenders for a top-four Premier League spot

The Los Angeles Rams’ Super Bowl win over the Cincinnati Bengals will not have been lost on Arsenal fans.

Nor will Rams and Arsenal owner Stan Kroenke’ attendance at the game, and his exclamation in lifting the Vince Lombardi Trophy: “In terms of building this stadium? It turned out alright,” he said.

You’d certainly hope so, with SoFi Stadium costing the Rams a cool $5.5 billion – the most expensive sports venue ever built. Arsenal, with no chance of celebrating silverware themselves this season, could only dream of such investment.

Kroenke, following years of growing frustration from Arsenal fans, did spend a considerable sum of money on the playing squad last summer, approximately £150 million, with Ben White, Martin Ødegaard and Aaron Ramsdale among the arrivals.

But his wallet was firmly closed during the January transfer window, despite the team’s desperate need for midfield reinforcements and a striker, especially with Pierre-Emerick Aubameyang departing for Barcelona.

Arteta flew to Denver only last month to meet with Kroenke while watching another one of the sports teams he owns in action, the Colorado Avalanche in the National Hockey League.

Their meeting came amid rumours that Arteta was set to be offered a new contract at Arsenal just six days before the end of the January transfer window. But, no transfers followed, with the exception of a deadline-day deal (and loan back) for defender Auston Trusty of the Colorado Rapids, owned by none other than Kroenke.

Perhaps his attention was elsewhere.

In an effort to win the Super Bowl – the Rams’ second in history, but their first under Kroenke’s ownership – the team went ‘all in’, investing heavily into the playing squad (on top of that sizeable sum shelled out on the stadium).

In the NFL, a team’s ‘Super Bowl window’ tends to be short – but for a few notable exceptions, like if your name is Tom Brady or the New England Patriots – due to a salary cap being imposed on each squad, and with the worst teams each season rewarded with the best draft picks to use on the premier talent coming out of college.

It is designed to create parity across the league, with the notion that any team can win on ‘any given Sunday’, and lead to stories like the Bengals’, where their run to the Super Bowl this season came just two years removed from finishing with a league-worst 2-14 record.

The Rams’ win over said Bengals on Sunday night, meanwhile, was no fluke. Since moving the team from St. Louis to Los Angeles in 2016, the ambition has been, unashamedly, to load their roster with star players, maybe even at the expense of the team’s future, the trade-off being to win now and maximise their Super Bowl window.

The Rams last used a first-round pick in the NFL Draft way back in 2016, taking the now Detroit Lions quarterback Jared Goff number one overall. They are set to go eight years without another one, instead choosing to trade away draft capital in order to accumulate star assets.

The Rams reached the Super Bowl three years ago, but lost to Brady and those pesky Patriots, but stuck with the same strategy. In the last 12 months alone, quarterback Matthew Stafford, pass rusher – and Super Bowl 50 MVP – Von Miller and superstar receiver Odell Beckham Jr. have all arrived in L.A to some cost.

There’s also the likes of Aaron Donald, Cooper Kupp and Jalen Ramsey – another big acquisition in 2019 – on the roster, all comfortably considered among the best in the game at their respective positions.

In speaking to Bucky Brooks – a former NFL player and scout turned broadcaster – on the Rams’ last Super Bowl run, he pleaded for Arsenal fans to “stay patient”, backing Kroenke to eventually achieve similar success in the Premier League.

“The Rams fans are very happy with him,” Brooks said. “He has put things in place and built it up in such a way that they have been able to win. That’s all the fans want.

“I feel it’s just a matter of time at Arsenal too. I think as he devotes more of his time and energy to building up the team, you’ll start seeing the same approach produce similar results.

“Especially with this Rams team getting him to the brink of an NFL Championship. Maybe he’ll see that as the blueprint now for Arsenal too.”

Kroenke didn’t get his Super Bowl title on that occasion, but he did on Sunday night. Can this now be that blueprint Brooks talked about?

Silverware may be off the table this season, but Arsenal are putting in a strong challenge for a top-four finish. They’re only two points behind West Ham in fourth, with three games in hand; Manchester United, one point above them having played two more, are in crisis; Tottenham’s challenge is crumbling with three-straight defeats.

Arsenal last played Champions League football five years ago, way back in 2016-17, so qualification for next season – and the huge financial benefits it would bring to the club – would be huge.

Taking his learnings from the Rams, this is Arsenal’s ‘window’ of opportunity, Kroenke must look to maximise it in order to turn round both the team’s fortunes and his standing with its fans.