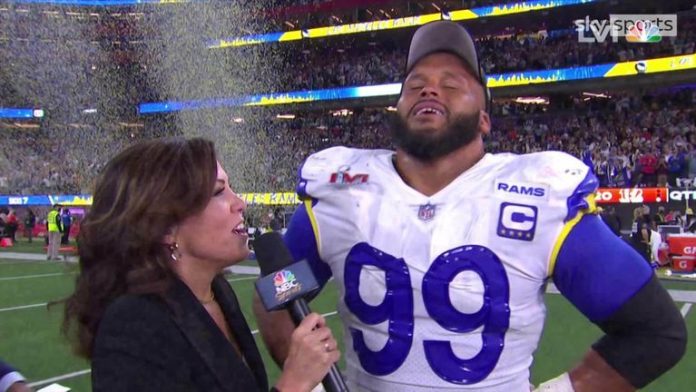 NBC’s Rodney Harrison reported before Sunday’s Super Bowl that Aaron Donald could retire were he and the Los Angeles Rams to see off the Cincinnati Bengals at SoFi Stadium.

Aaron Donald reminded why he is widely considered the NFL’s best pound-for-pound player on Sunday night as he called game to clinch Super Bowl glory for the Los Angeles Rams against the Cincinnati Bengals – but might that be his final act?

During the build-up to the game NBC’s Rodney Harrison reported that Donald could potentially retire should he go on to win his long-awaited first ring in what would be the epitome of ‘going out on top’.

Rams head coach Sean McVay referred to a ‘poetic’ finale as Matthew Stafford connected with Cooper Kupp for the go-ahead touchdown before Donald swarmed Joe Burrow to thwart a fourth-and-one attempt and seal the win inside the final minute.

With the 23-20 victory Donald added the title of world champion to a bulging resume that already includes three Defensive Player of the Year Awards, Defensive Rookie of the Year, eight straight Pro Bowl selections since entering the league and seven All-Pro honours.

Would he bow out now? Team-mate Von Miller isn’t so sure.

“I don’t know, man,” said the Rams edge rusher. “He’s done everything you could possibly do. But this feeling right here, there’s nothing like it. It’s addictive, once you feel this. Coming to the Super Bowl is one thing, but winning it is different.

“We’ll just have to see. He’s done so much, but I tell you, this feeling is great. It just makes you want it more and more and more. But he’s definitely capped off a great career if he chooses to do that. But this is an addictive feeling, man, and I just can’t see him walking away from this.”

Donald was questioned about his future in his on-field interview immediately after the game, but insisted he was only thinking about soaking in the moment.

The 30-year-old had been part of the Rams team that was frustrated by the New England Patriots in a 13-3 defeat at Super Bowl LIII at the end of the 2018 season, insisting prior to the game that he was was better prepared second time around.

No other player in the league has more sacks than Donald’s 98 since being drafted 13th overall in 2014, the Pittsburgh product adding two more alongside three quarterback hits against Burrow.

“I certainly hope that means he still wants to be a Ram,” said coach McVay. “But guys like him are why you coach. He has elevated everybody.

“I think the epitome of greatness is making everybody that you’re around in every situation you’re a part of better. That’s exactly what Aaron does.

“And that still doesn’t do justice to what an impact he’s made in terms of elevating our whole organisation. I promise you guys, I was mic’d up so you guys can hear, when it was the fourth down and you could see they got in the shotgun and they were probably not going to run the football, I said, ‘Aaron is probably going to close the game out right here.’ And he is the F’in man.”