Home Sport Rangnick: No need to strip Maguire of captaincy despite ‘weaker moments’ 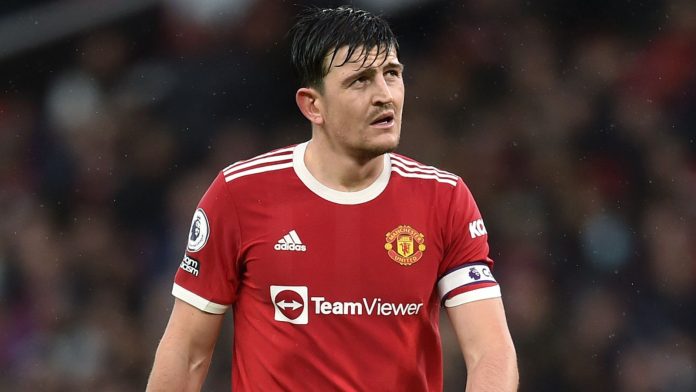 Ralf Rangnick insists there is no need to strip Harry Maguire of the Manchester United captaincy despite admitting he has seen “some weaker moments” from the defender in recent matches.

Maguire has come under scrutiny for several below-par performances this season and a section of United supporters have suggested the armband should be taken away from him.

Criticism of the 28-year-old intensified over the weekend as United surrendered a 1-0 lead for the third game in a row to draw 1-1 against Southampton at Old Trafford, but interim manager Rangnick sees no reason to change his official leader on the pitch.

FREE TO WATCH: Highlights from Manchester United’s draw with Southampton in the Premier League

“I think when he came back after his injury he did extremely well. He had a very good performance, a very good game against West Ham,” Rangnick said.

“In the past two games, yeah he had some weaker moments, against Southampton and when we conceded the goal at Burnley, but he’s our captain and I don’t see any reason to change that.”

Maguire was named United captain in January 2020 by previous boss Ole Gunnar Solskjaer, five months after he moved to Old Trafford in a world-record £80m transfer from Leicester.

He has already made 132 appearances for the club and Rangnick says it will take time for the England international to adjust to a new way of playing.

He added: “He’s a player who has to develop, get better, like all the other players.

“The way that we are playing now is new also to him because in the English national team he was used to playing in a back three and here at Manchester United, in most cases a back four, but still not being as proactive, not with that kind of rest defence always being on the front foot when we are trying to defend.

“This is something also new to him and it will also take some time for him to get used to that, to get adjusted to that.”

​​Ahead of Tuesday’s Premier League game against Brighton, Rangnick accepts United are not a “natural pressing team” after Southampton manager Ralph Hasenhuttl questioned his side’s work ethic during Saturday’s 1-1 draw.

Hasenhuttl commented on United’s lack of tracking back without the ball in his post-match press conference, while former United midfielder Paul Scholes suggested the players did not want to put in a shift for the club following the stalemate.

Hasenhuttl said on Saturday: “It is not a big secret that when they lose the ball that the reverse gears are not always the best from everybody.”

Asked what he thought of Hasenhuttl’s comments, Rangnick replied: “Well as far as I know he said that they were struggling in the first half against us, that we won quite a few balls and I think the mere fact that they changed their formation within the first 45 minutes two or three times showed that we did a good job in the first half.

“Yes, what he said that we are not a natural pressing team – this is normal. They haven’t been doing that in the last couple of years and to change that into a pressing team all the time is difficult during the season.

“For us, it’s important that we know and we pick the right moments when there is time to be proactive, to press, to be best in counter-pressing and if this is not possible, to stay compact and not too easily outplayed, and those were the moments we had to suffer when we conceded the goals too easily.

“Some of them were in transitional moments when we were almost overanxious. We were not ready at the right moment and then saying ‘oh, I should have pressed’ coming one or two steps too late and then giving the other team space to be on the counter-attack.

“I think this is also not only got to do with tactical discipline but to be clever, smart enough to realise that if now it’s not possible, then just stay in position, keep your shape, keep your formation and then still make it difficult for the other team to play through our lines.”

Nev: Man Utd’s problems not down to the manager anymore

In an explosive podcast, Neville dissected the “nonsense” emanating from Old Trafford following a weekend in which the opposition manager questioned the team’s work rate and further points were dropped in the race to qualify for next season’s Champions League.

Ronaldo drought one of many problems for Man Utd

Cristiano Ronaldo tilted his head towards the sky and threw his arms up in frustration as Southampton’s Romain Perraud cleared his low effort off the line during Saturday’s 1-1 draw at Old Trafford.

The pained reactions are becoming a familiar sight. Ronaldo scored 14 times in the first half of the campaign but his failure to find the net against Saints took him to six games without a goal. It is his longest drought at club level since the 2008/09 campaign.

A six-game barren run would not be much cause for alarm in most cases but Ronaldo is different. The 37-year-old has set himself extraordinarily high standards having scored 688 goals in 923 club games. He is subjected to more scrutiny than most.

Follow every Man Utd game in the Premier League this season with our live blogs on the Sky Sports website and app, and watch match highlights for free shortly after full-time.

Get all this and more – including notifications sent straight to your phone – by downloading the Sky Sports Scores app and setting Man Utd as your favourite team.