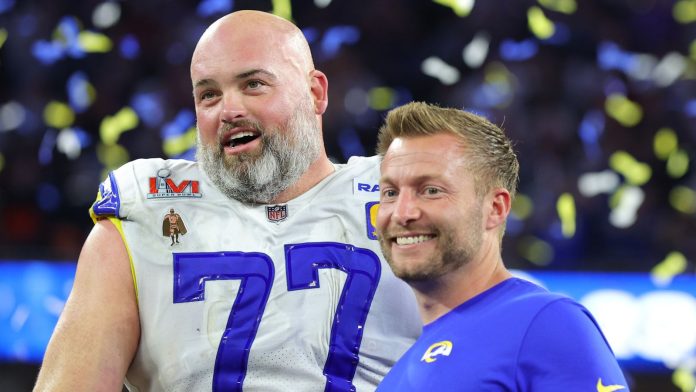 Benedict Bermange picks out the best stats from the Los Angeles Rams’ 23-20 win over the Cincinnati Bengals in Super Bowl LVI, including veterans Andrew Whitworth and Matthew Stafford securing their first rings and the Rams defense tying the title-game sack record

Rams offensive lineman Andrew Whitworth won his first Super Bowl title at the age of 40 years and 63 days, making him the oldest player ever to win their first title.

The Rams‘ 15-play game-winning drive was the longest fourth-quarter go-ahead touchdown drive (by number of plays) in Super Bowl history. However, their total of just 43 rushing yards is the second-fewest by any Super Bowl-winning team, behind another Rams team. Their average rush of 1.87 yards was also the lowest in Super Bowl history by a winning team, even worse than the 2.23 yards per rush that the victorious Baltimore Colts had against the Dallas Cowboys in Super Bowl V in 1971.

Fewest rushing yards by a team in Super Bowl history

Matthew Stafford had a total of 49,995 regular-season passing yards before lifting his first Vince Lombardi Trophy, the most by any quarterback before winning his first Super Bowl title. The previous record-holder was John Elway, who had amassed 48,669 yards through the air before leading the Denver Broncos to victory over the Green Bay Packers in Super Bowl XXXII in 1998. Stafford is also just the third quarterback to win a Super Bowl in his first season with a new team, following Trent Dilfer with the Ravens in Super Bowl XXXV and Tom Brady with the Tampa Buccaneers last year.

The Rams defense had seven sacks, equalling the record for the most by a team in Super Bowl history.

Most sacks by a team in Super Bowl history

Von Miller had two sacks of Joe Burrow, giving him 4.5 sacks in his Super Bowl career, equalling the record held by Charles Haley.

Tee Higgins‘ 75-yard touchdown reception was the longest offensive score in a Super Bowl since Willie Parker’s 75-yard rush in Super Bowl XL in 2006. It was also the first touchdown ever scored from the first play from scrimmage in a half in the Super Bowl.