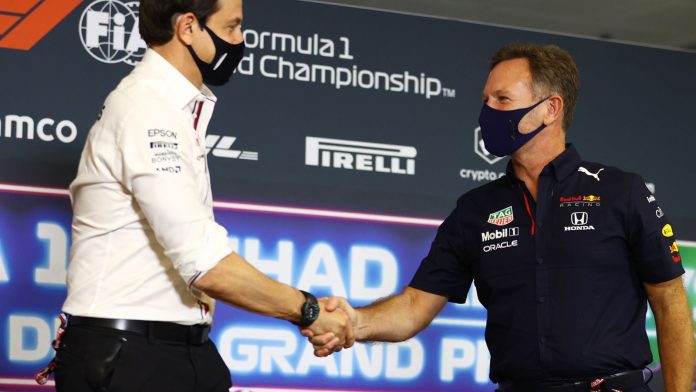 “They were close to each other and they were in a good mood, so that was good,” says FIA president on Toto Wolff and Christian Horner, who were both at F1 Commission meeting discussing Abu Dhabi on Monday; “Structural changes” within FIA still on hold following meeting

Mercedes boss Toto Wolff and Red Bull’s Christian Horner were both at the F1 Commission meeting in London on Monday where “detailed discussions” took place around the controversial title finale involving their drivers Lewis Hamilton and Max Verstappen.

Ben Sulayem, the newly-elected FIA president, chaired the meeting, and said afterwards that there were no issues between the two teams despite the heightened hostility during and particularly at the end of last season.

“They were in line,” said Ben Sulayem. “I think it’s because of Valentine’s Day.

“They were close to each other and they were in a good mood, so that was good. I expected more entertainment but it was good to see the harmony between them.”

The F1 Commission, involving Formula 1, the FIA and the teams, went on for four hours on Monday but although Abu Dhabi was discussed, changes as a result of the last-lap controversy are still on hold.

Ben Sulayem has promised “structural changes” and an “action plan” in the coming days.

Wolff gave no comment afterwards, though Ben Sulayem said on Hamilton’s future: “We agreed on certain things and the analysis is still going on.

“But it will come soon… it was a good discussion there. So we will see.”

One man whose future is in severe doubt is Michael Masi, the race director whose handling of the final laps and the safety car gave Verstappen the chance to overtake Hamilton on his older tyres.

Sky Sports understands Masi is set for a different safety role within the FIA. The race director role, meanwhile, is likely to be shared between two individuals, and they will be better supported and perhaps rotated in that role.

“Information will be announced, but definitely as I said, the integrity of the FIA will always be intact,” added Ben Sulayem. “I am elected to do that but also have fair motorsport, as that’s my duty.

“So it was a very good meeting. We can only go forward. This is important for the FIA, for the integrity of the FIA and for the sport. So we can only improve the future.”