Home Culture ‘I curtsied in my track suit’: That moment you meet Prince Harry... 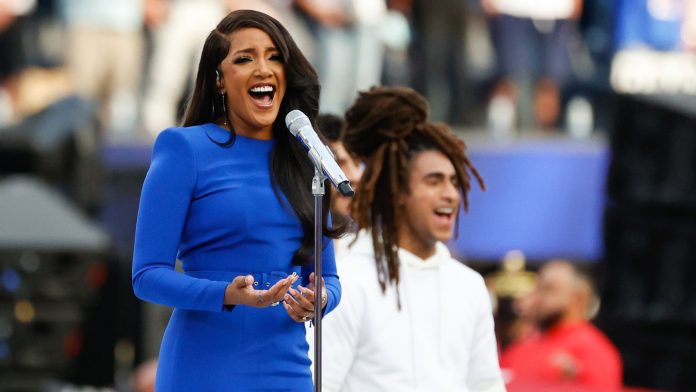 What do you do when you meet a prince in your joggers? Carry on as normal but with a curtsy, of course.

Country star Mickey Guyton did just that when she met Prince Harry at the Super Bowl game in Inglewood, Los Angeles, at the weekend.

Guyton, a Grammy-nominated musician who opened the event with a performance of the US national anthem The Star Spangled Banner, shared a picture on social media and said the Duke Of Sussex was “just lovely”.

Pictures of Harry and his royal cousin Princess Eugenie watching the American football clash between the Los Angeles Rams and the Cincinnati Bengals had circulated online following the game.

Guyton was among those who got to meet him.

“I met Prince Harry. He was just lovely,” she wrote on Twitter, sharing a photo alongside him. “I even curtsied in my track suit.”

Performing on stage, Guyton had gone for a slightly more glamorous look. But since he and Meghan have been living in California, Harry has ditched the blazers to sport a more relaxed vibe himself so she didn’t have anything to worry about.

Not sure you would get away with joggers for the Queen, though.

The Super Bowl is one of the biggest cultural events in the US, with its half-time show of super-star musicians arguably more famous than the game itself.

This year saw hip-hop legend Dr Dre joined by an all-star cast including his proteges Snoop Dogg, Eminem and 50 Cent, as well as Kendrick Lamar and R&B queen Mary J Blige, for a performance seen as a love letter to black history in Los Angeles.

Fans in the 70,000-capacity SoFi Stadium also got to see actor Dwayne “The Rock” Johnson channelling his former wrestling persona to warm up the crowd.

The Rams claimed a late touchdown to win the contest 23-20.