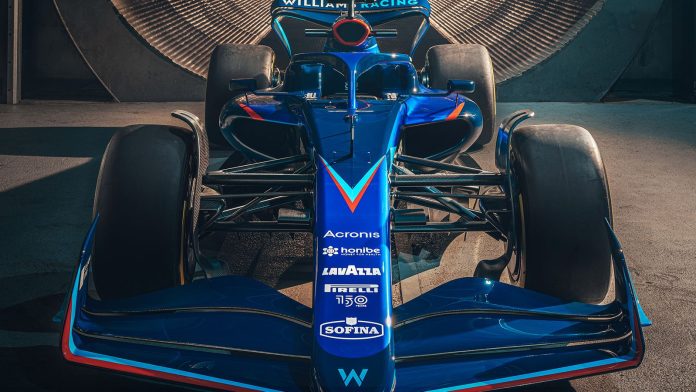 Williams have revealed an updated blue colour scheme for their 2022 Formula 1 car, kicking off a new era with a nod to their past.

The British team, one of F1’s most famous and historic manufacturers, are looking to maximise the much-changed rules to leap up the order this year after an improved eighth-placed finish in 2021, and start the new season with a new driver in Alex Albon after George Russell’s move to Mercedes.

Albon and team-mate Nicholas Latifi were both present as the sport’s 16-time world champions became the sixth team to launch their season with a first look at a new car on Tuesday.

The team say it was only a ‘livery reveal’ and so their FW44 – which, as always, takes the initials of their legendary founder Sir Frank Williams – car is expected to look different come the start of pre-season testing next week.

Their new colours, however, are here to stay. After mostly mixing blue and white in previous years, Williams revealed a 2022 car with different shades of blue, as well as dashes of red to highlight their British history.

After three seasons at the bottom of F1 standings in 10th – during which they scored a combined eight points – Williams rebounded back to eighth last year.

Their final tally of 23 points was aided immensely by back-to-back double points finishes in Hungary and Belgium, and it was in Spa where they scored their first podium in six years as Russell was classified as second in a Grand Prix that was abandoned due to the rain.