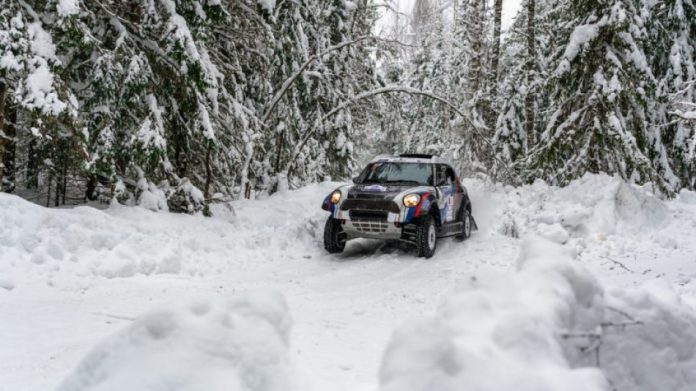 Experienced Russian driver Vladimir Vasilyev overcame a transmission issue and a gearbox change on day one to storm through and seal a fourth win and a third successive victory at the Baja Russia Northern Forest, the opening round of the 2022 FIA World Cup for Cross-Country Bajas and the first encounter in a new FIA Eurasia Zone Cross-Country Rally World Cup.

Partnered by Oleg Uperenko at the wheel of a Mini Cooper Countryman, Vasilyev gained the lead on the second of nine stages held across frozen and snow-covered tracks through the Igora Drive Sports and Entertainment Complex and the surrounding forests in the Leningrad region and appeared to be in command until he suffered the transmission issue.

With the gearbox changed at the service point, Vasilyev was able to claw back some time over the last two stages on Saturday and stage wins on both specials on Sunday enabled him to move clear of overnight leader Tomasz Bialkowski and snatch the win by the margin of 7min 24sec.

“It was a good last day,” said Vasilyev, who secured maximum points in both the FIA Baja series and the FIA Eurasia Zone Cup. “It was snowy in the morning but, during the second passage, cars left deep and narrow ruts. There were many cars in the T3 and T4 categories. It was like on rails. But I am very happy with the win. It’s a good result for us.”

Nifontova duly finished on the podium and the Can-Am driver and navigator Ekaterina Zhadanova also triumphed in the fiercely contested FIA T3 section.

Saudi Arabia’s Yazeed Al-Rajhi had won the event in 2014 and teamed up in Russia for the first time with his regular navigator Michael Orr. The pre-race favourite won the Qualifying stage and started second on the road for the first of the longer stages, only to clout a rock hidden in the snow. The resultant impact damaged the Toyota Hilux’s steering and lower suspension arm and put Al-Rajhi out of the running for a top finish.

Russian rally driver Sergey Remennik made the transition to Baja-type racing for the first time in a Snag Racing Team Can-Am Maverick and finished fourth overall and won the T4 category.

Bialkowski was partnered by Dariusz Baskiewicz and had originally rounded off the podium places and been awarded the T4 win in his Polaris RZR 64 Pro XP Turbo. But the Pole was disqualified at post-event scrutineering for air restrictor measurement violation and a secondary breach of the technical regulations.

The South Racing Can-Am Team entered two Mavericks for Spain’s Fernando Alvarez and the Saudi female driver Dania Akeel. Alvarez rounded off the top six and secured second place in T3, while the Saudi relished the experience of driving on snow and ice for the first time and completed the rally in seventh in T3. Mashael Al-Obaidan is also tackling the Baja series and was classified in 10th in T3.

Al-Rajhi started strongly and beat Vasilyev by 37 seconds through the 15.53km Qualifying Stage at the Igora Complex on Friday afternoon. Early FIA T3 section leader Enrique Reyes was third fastest and Bialkowski guided his Polaris to fifth overall and an early lead in T4.

2022 FIA World Cup for Cross-Country Bajas – positions after round 1:

Why Gabriel is relishing Arsenal project | ‘I told Jesus to come’