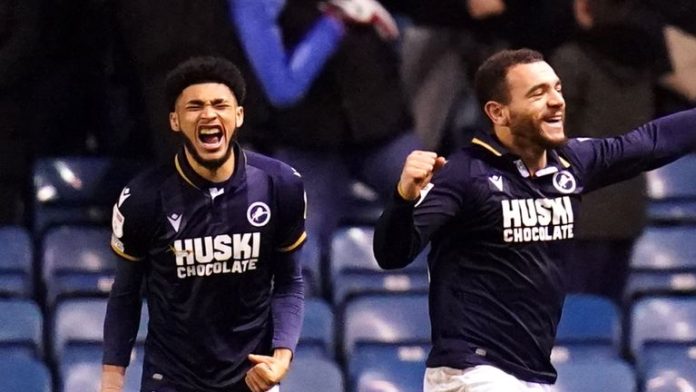 Substitute Tyler Burey scored his first senior goal for Millwall as they dealt London rivals QPR’s promotion hopes another blow with a 2-0 Championship victory at The Den.

The 21-year-old came off the bench in the first half and it was his fine finish that sealed a second win in a row for Gary Rowett’s side, who lifted themselves up to 14th in the league table after Mason Bennett’s opener.

QPR were hoping for a reaction to Saturday’s shock narrow defeat at Barnsley but they failed to get anything from the game as they remain fourth – six points behind second-placed Bournemouth, having played a game more.

Millwall should have been in front after 30 seconds when Bennett’s low cross was allowed to run through for Danny McNamara, but the wing-back fired the ball well over the crossbar.

QPR were not helped by a couple of knocks to their players in the opening 20 minutes, with one of those leading to Lee Wallace having to be replaced by Moses Odubajo.

The visitors then needed goalkeeper David Marshall to pull off a top-drawer save to push away a firm strike by Jed Wallace, from Billy Mitchell’s chip across that was arrowing into the bottom corner.

It was then the Lions’ turn to suffer an injury blow when Oliver Burke had to leave the action with a muscle strain, with youngster Burey – who spent the first half of the season on loan at Hartlepool – taking his place.

Marshall was called into action when the Scotland international helped Jake Cooper’s header from Scott Malone’s corner over the crossbar.

It took Rangers 36 minutes to have their first opening, with Jimmy Dunne scuffing his effort from Stefan Johansen’s corner straight at Millwall goalkeeper Bartosz Bialkowski.

The first half finished goalless but Millwall were ahead within three minutes of the restart thanks to an absolutely brilliant move.

Wallace chipped the ball towards the left for Malone to play it across first time for Bennett, who only needed one touch himself to steer it into the bottom corner.

The lead was doubled by another moment of quality after 64 minutes when Wallace’s backheel put Burey into space and the forward advanced into the area before bending in an excellent finish across Marshall.

QPR almost had a root back into the game 10 minutes later when a looping header by Yoann Barbet from Ilias Chair’s corner needed to be headed off the line by Maikel Kieftenbeld.

Bennett nearly had his second when he chased down Wallace’s raking long pass and turned inside Barbet before his shot was saved by Marshall at his near post.

Millwall’s Gary Rowett: “I think that’s probably as good a performance, overall, that my team has put on since I’ve been here, against a very good QPR side who we’ve found very hard to beat in recent years. They’re a talented team, they keep the ball well, they make it difficult for you to press them and they’ve got very good creative forward players. We really stifled that tonight and I thought, in open play, I can’t really remember them creating too many chances.

“I thought we had most of the big chances tonight and I’m a little bit disappointed, in some ways, that we didn’t win by more than two goals. We could have scored after two minutes and there were a couple more after that, but there were some big performances tonight. The only frustration is we seem to count the cost after every single game – Ollie Burke felt his hamstring which is just incredibly disappointing.”

QPR’s Mark Warburton: “The message before the game was we’ve got a lot of respect for Gary’s teams and Millwall. They win duels, they win challenges, they put balls into your box, they’ve got guys coming in there with good delivery and you’ve got to do the basics really well. I thought we started off OK for the first 15 minutes but then started to lose one or two duels and challenges.

“We gave away soft free-kicks. The ball starts coming into your box and they get a foothold in the game. We just didn’t do the basics well enough tonight. The fact is we didn’t move the ball as well as we could do. We didn’t have the quality of the ball coming into the box as we normally do. Did we do enough to win the game? I don’t think we did tonight.”