Home Sport Bronze: I’m getting back to my best after playing injured for a... 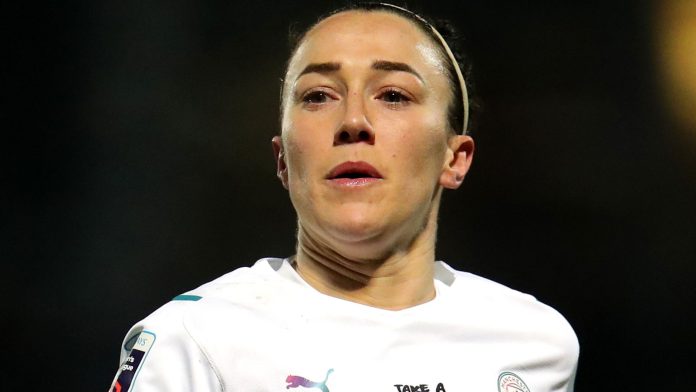 England and Manchester City right-back Lucy Bronze is determined to put a “frustrating” period behind her and get back to her best after recovering from knee surgery.

Bronze is training with the squad ahead of the start of inaugural Arnold Clark Cup, which sees the Lionesses host three other nations ranked in the top 10 in Canada, Spain and Germany.

The 30-year-old missed the first half of the Women’s Super League season after undergoing the fifth knee operation of her career and is looking forward to making up for lost time.

“The year before was more frustrating than being injured. I played a whole year being injured and just had to carry on and not be at my best,” Bronze told reporters from England’s base at Middlesbrough’s Rockliffe Park.

“Both physically and mentally it was quite draining so actually, as much as it was disappointing to miss out on England games and it was disappointing not being able to help my club team with all the injuries that happened there, it was something for myself I needed to do and have the operation.

“Now I’m just slowly building back up, performances are coming, match fitness is coming and hopefully I can get back to the very top and the very best of my performances in the next few months.”

England’s opening game comes against Canada at the Riverside on Thursday night as Sarina Wiegman faces the first stern test of her tenure.

Since taking charge in September, Wiegman has led England to six wins from six with an aggregate score of 53-0 as they brushed aside inferior opposition in World Cup qualifying.

“I’ve missed the last three camps so we’re playing catch-up. I’m trying to get to know her quite quickly,” Bronze added.

“The team’s playing with a lot of energy. We want to win the ball back quickly and score a lot of goals.”

It was confirmed Arsenal’s Leah Williamson will once again captain England for the three games, having worn the armband for Wiegman’s first four matches with Steph Houghton missing through injury.

Sky Sports digital – Follow all the latest from the WSL across SkySpots.com and app, including exclusive features and interviews, plus dedicated live blog coverage and in-game clips from games live on Sky Sports. You can watch free match highlights from every WSL game this season on Sky Sports’ digital platforms and YouTube channel.

Inside the WSL – Hosted by award-winning broadcaster and journalist Jessica Creighton, Inside the WSL is a comprehensive round-up of all things Barclays FA Women’s Super League and women’s football. Airing weekly from Thursday, September 9 on Sky Sports Premier League, the half an hour show will review and preview matches, include in-depth analysis and exclusive player interviews. Viewers can expect gripping behind the scenes access as well as a summary of all the action both on and off the pitch.

Sky Sports Social – Alongside coverage and visibility for the league across all Sky Sports’ main social media channels, a new bespoke Twitter channel @SkySportsWSL will be the home of all Barclays FA WSL content on Sky Sports.

To add all the Barclays FA WSL fixtures to your calendar click here.