Home Sport Pep: Silva is the perfect player | ‘There’s a long way to... 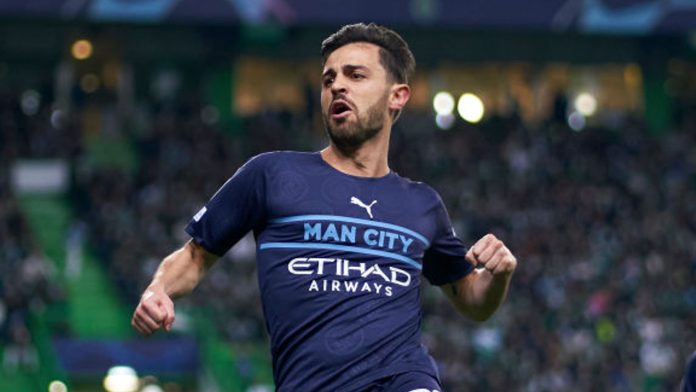 City all but confirmed their place in the quarter-finals by inflicting Sporting’s joint-biggest home defeat in European competition, as they underlined their status as Champions League favourites.

Silva, a former Benfica player, put on a show in his hometown, scoring a wonderfully struck half-volley that cannoned in off the crossbar to put City 2-0 up, before his deflected effort made it 4-0 at half-time.

Guardiola has told Silva he needs to improve his goalscoring if he is to elevate his game, and the midfielder answered emphatically on Tuesday night by scoring his first double in Europe’s elite competition.

“I always tell him ‘you are the perfect player’,” Guardiola said. “With the ball, he is more than exceptional, but I always say to him you have to go and win games, you have to have the ability to do it. He has the technique, everything.

“This was his hometown, and he loves coming back here. Of course, he is a former Benfica player, so this was special for him tonight.”

Guardiola was not completely satisfied with his side’s performance in Lisbon, warning his players that they must maintain perfection if City are to win their first Champions League trophy.

“We defended well and got an incredible result,” he added. “We have a duty to look at the performance too, even if the result is a dream.

“The performance could have been better. The difference between the two teams is not 0-5, but we were just so clinical.”

City were unbeaten on their way to last season’s final before being defeated by Chelsea in Porto, and Guardiola has not forgotten the negative response to last May’s result.

He added: “If we do go through to the quarter-finals, who knows what will happen. Last season we made a perfect Champions League season, then we lost the final. Then we are seen as a failure. I will not hide behind a 5-0 win, there is a long way to go.”

Manchester City return to action on Saturday when they host Tottenham in the Premier League; kick-off at 5.30pm.