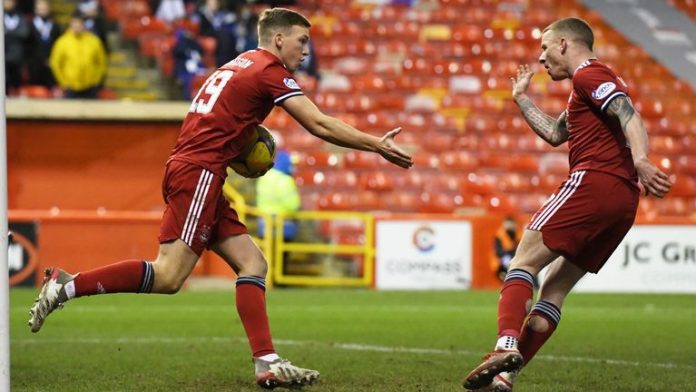 St Johnstone remain bottom of the cinch Premiership after being pegged back to a 1-1 draw by managerless Aberdeen for a share of the spoils at Pittodrie.

Callum Davidson’s side took the lead after just six minutes through former Dons loanee Callum Hendry but the hosts had the better of the play and equalised through a Lewis Ferguson penalty after 71 minutes.

His side could not have got off to a worse start, however.

Glenn Middleton outmuscled Jonny Hayes in the left back area and put in a low cross, which after Hendry and Ali Crawford had seen shots blocked, was finally turned into the net by Hendry.

The home side would go on to make the better of the first-half running with a Ferguson shot drawing a save from Zander Clark, before Connor Barron sliced the rebound well wide.

Scott Brown saw a deflected effort clip the crossbar before Hayes was denied by Clark.

The St Johnstone goalkeeper would go down with a calf injury just after the half-hour and attempted to play on, making a fine diving save from Ferguson’s deflected shot before eventually being forced off just before the interval, to be replaced by Elliot Parish.

Parish had his first taste of the action in holding a Ferguson drive after a neat exchange of passes with Christian Ramirez, but it would be injuries that defined the opening period of the second half, with Saints’ striker Hendry forced off before Aberdeen captain Brown also had to be replaced.

Brown’s injury came after he had dropped into defence when Declan Gallagher was replaced at half-time and meant Ferguson moved back into an unfamiliar role at the heart of the defence.

Aberdeen found themselves level from the penalty spot with 20 minutes remaining after Calvin Ramsay – who has impressed so far this season – was brought down inside the area.

Ferguson stepped up to fire the resulting spot-kick into the bottom-left corner as Parish was sent the other way.

The home side had the ball in the net again soon after, only for Vincente Besuijen’s close-range finish to be flagged offside.

Aberdeen caretaker boss Barry Robson: “You can see a team that’s had a hard time of it lately and they’re lacking a wee bit of confidence.

“When St Johnstone scored their goal, you can see we didn’t move the ball quick enough but we grew into the game and we had some really good chances in the first half we should have scored.

“We lost Declan Gallagher at half-time, then lost Scott Brown and ended up with Lewis at centre-back. It’s the sign of a team that wants to fight and I like that.

“On another night we come away with a couple of goals win.”

St Johnstone boss Callum Davidson: “The penalty baffles me. If there is contact – and I don’t think there is – it’s outside the box.

“In the last three games we’ve had a sending off and two penalties. I think it’s important we give referees a little bit of help with big decisions like penalties.

“The league is so tight and games swing really quickly on big decisions. I don’t particularly like VAR myself but it is something we have to look at as a game.

“We lost four players to injuries but we played with belief and confidence and if we keep doing that, we’ve always got a chance.”

Aberdeen are back in action on Saturday in the Scottish Premiership when they travel to Motherwell. St Johnstone face Hearts in the league on the same day. Both games kick off at 3pm.