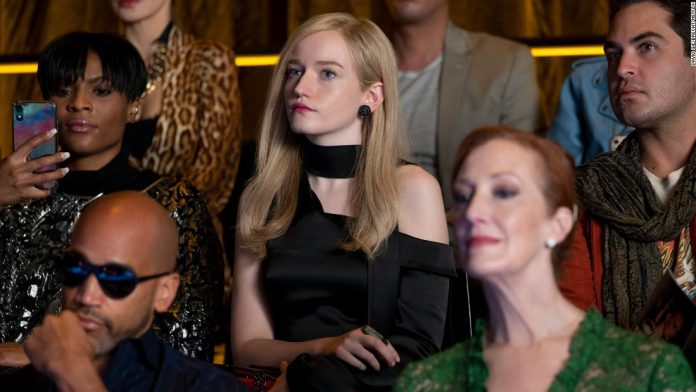 Rhimes has populated the show with a number of familiar faces from her ABC/”Scandal” days, but the marquee parts go to Julia Garner (“Ozark”), sporting an accent seemingly patterned after Balki in “Perfect Strangers,” and Anna Chlumsky (“Veep”). Even if Garner’s character, Anna Delvey, actually sounded this way, listening to it for nine episodes borders on becoming a distraction at best, and an ear-bending ordeal at worst.
While taking liberties with the story, the underlying bones of it are pretty sensational: Delvey, a “fake heiress,” beguiled the Manhattan elite and banks alike, worming her way into high society before the walls came crashing down and landed her in a courtroom.
Delvey lived the good life, creating an image that fooled plenty of people and left many reluctant to discuss their relationships with her. That included running up expenses like a $62,000 trip to Morocco, with a friend (played by “Scandal’s” Katie Lowes) holding the bill.
Anna’s story was a tough one to crack, due in part to the reticence of those she fooled. Enter Chlumsy’s Vivian, who doggedly pursues Anna and her friends, trying to expose not just what happened but who Anna really is and where that peculiar accent might have originated. (The show is based on a New York magazine article by Jessica Pressler.)
Strictly as a viewing proposition it doesn’t help that most of the episodes run more than an hour, which breeds a certain flabbiness in the storytelling. The same goes for a structure that shifts the focus to a different one of Anna’s marks in each chapter, jumping back and forth in time before reaching the trial and eventually deciding her fate.
Along the way Vivian and Anna have several prison interviews, but we’re expected to accept that the reporter has bonded with her — or at least finds her oddly endearing, for reasons that frankly seem mystifying — even as she struggles to meet her deadline, hold her life together and, oh yeah, have a baby.
If that sounds like a lot, it is, with a tone that’s often whimsical. The flashbacks generally work better than Vivian’s part of the story, which provides a reminder that portraying the practice of journalism in drama can be a thorny proposition, with a whole lot of misfires for every “All the President’s Men.”
Those criticisms don’t completely undercut the meatiness of the story, and the schadenfreude of how all these privileged masters and mistresses of the universe were so easily deceived. But it does make “Inventing Anna,” finally, a bit of a slog — a series that seeks to be a little too inventive for its own good.
“Inventing Anna” premieres Feb. 11 on Netflix.