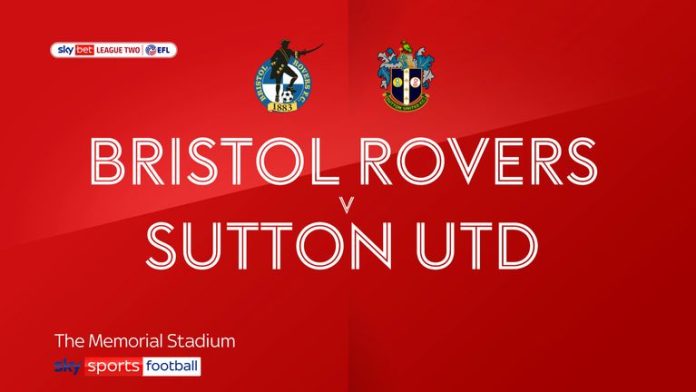 Goals early in each half from Harry Anderson and Aaron Collins saw Bristol Rovers end Sutton’s 10-match unbeaten League Two run with a 2-0 win at the Memorial Stadium.

The home side took a fourth-minute lead when Anderson connected sweetly with a low right-footed drive from just outside the box.

Rovers should have been out of sight by the break. Elliot Anderson went close on three occasions, Collins shot straight at Dean Bouzanis and a goal was ruled out by a very late linesman’s flag.

Paul Coutts had the best chance to make it 2-0 on 45 minutes but saw his penalty saved by Bouzanis after a foul on Collins by Coby Rowe.

Collins doubled the advantage seconds after the interval, taking advantage of Bouzanis’s rash decision to leave his area by rounding him and scoring from out near the right touchline.

Sutton contributed to an entertaining game, but only threatened in the closing minutes of the first half when Enzio Boldewijn saw a shot deflected just wide.

Rovers continued to be the better side after the break and were worthy winners.