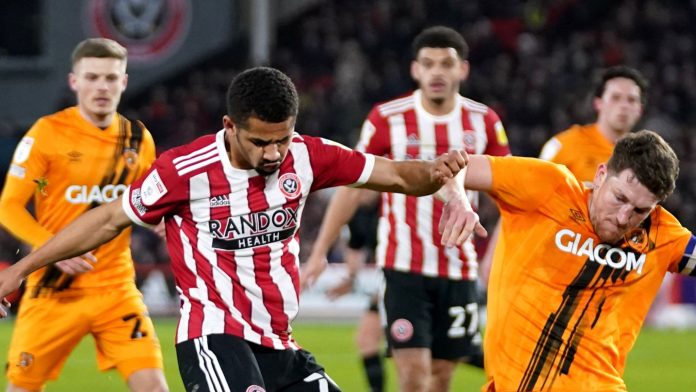 The Blades had the better of the chances, with Jack Robinson threatening in the first half and Oli McBurnie and Morgan Gibbs-White always in the thick of the action, but Shota Arveladze’s side kept them at bay.

The visitors were forced to make an early change when Lewie Coyle went off injured, with Callum Elder taking his place.

United’s Robinson had a good chance to open the scoring, heading wide after finding himself unmarked and getting on the end of an Oli Norwood free-kick.

Morgan Gibbs-White also threatened inside the area, producing an effort which was deflected over.

After Hull’s Keane Lewis-Potter got the better of Chris Basham, Marcus Forss found himself in a dangerous position on the right-hand side of the area but he dragged his shot wide of Wes Foderingham’s goal.

Lewis-Potter then tried his luck from distance with the ball flashing just wide.

After persistence from Gibbs-White on the edge of the area, Iliman Ndiaye put an effort over.

Lewis-Potter was again involved with a cross which picked out Regan Slater, who sliced his effort wide against his former club.

McBurnie had a great chance for the hosts towards the end of the half, but he could only shoot straight at keeper Matt Ingram after finding himself free on the left-hand side of the area.

Richie Smallwood shot over from the edge of the area for Hull.

In time added on at the end of the half, McBurnie flung himself forward to get on the end of a cross from Norwood, putting his diving header over.

Soon after the break, McBurnie headed wide from another Norwood cross. Gibbs-White then backheeled the ball into the path of McBurnie, whose low shot was easily saved by Ingram.

The hosts had a great chance on the break, with Gibbs-White spearheading a counter-attack following a Hull corner and slipping the ball to Ndiaye, who could only fire straight at Ingram from inside the area.

Conor Hourihane was the next to threaten, firing in a free-kick which was deflected wide of Ingram’s left-hand post.

Hull’s Ryan Longman tried a shot from the edge of the D which curled narrowly wide of Foderingham’s left-hand post.

McBurnie put a header over after rising high to meet a Norwood corner.

United skipper John Egan was unable to direct his header on target in time added on while Rhys Norrington-Davies put a low, angled shot wide.

The result ended a run of three straight defeats for Hull, who will be the happier of the two sides with a point.

Sheffield United’s Paul Heckingbottom: “It was a frustrating night, for the obvious reasons. It was just the missed chances. It was simply one of those nights. If we create that many against teams at home between now and the end of the season, we should be winning the vast majority of our games. You can’t say you deserve the win when you’re missing chances.

“It is a point gained and that’s important. We created chances but we just weren’t good enough to take them. We had plenty of opportunities and the moment you take one, the pattern of the game changes. The fact that we didn’t, the pattern of the game is set “My expectancy has been to try and set the team up to win every game. This has been no different. Maybe the expectancy is rising and if it is, good – it means we’re doing something right.”

Hull’s Shota Arveladze: “I think we defended very well, I have to say. We had a chance to give them a small message at half-time and we were better in the second half. I think they only had one clear chance in the second half. The first half they played us out. They are a very solid team – good team. We knew it was going to be really hard.

“We had three or four chances. One was really close. This is the most difficult part, when you run so much behind the ball. Most of our energy was used to defend the point and keep a clean sheet. It was a very tough away game and I’m really pleased that we got a point.”