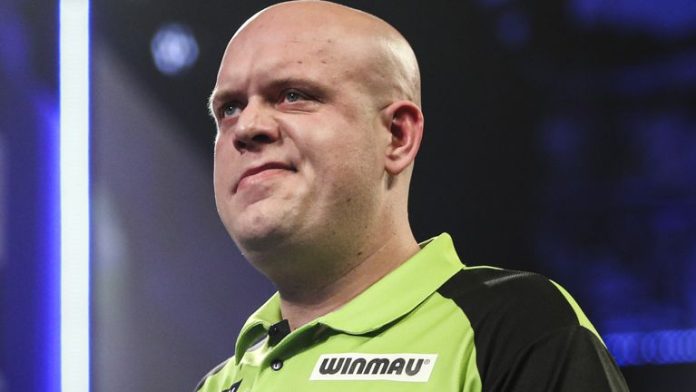 Joe Cullen added back-to-back ProTour titles last weekend to his maiden televised title at the Masters in January; He returns to Premier League action in Belfast on Thursday where he will be looking to add to Michael van Gerwen’s woeful start to the year

‘The Rockstar’ is enjoying his first Premier League campaign and had battled back from 5-2 down to beat world No 1 Gerwyn Price in a deciding leg on his way to finishing as runner-up in Liverpool last week.

Cullen, who lost in his quarter-final tie in Cardiff on the opening week, continued his dream start to his year by going unbeaten across two days at Players Championships 3 and 4, adding to his maiden televised title at the Masters in January.

Well…. Back to Back titles 🏆 🏆 really enjoying the game at the minute and the results are showing it!! Will keep working hard & trying to improve. Thanks for all the nice messages@ModusDarts180 @Winmau @MarshallMotorGp @CelElectrical @bi_folds

He now takes on Van Gerwen with the Dutchman suffering a crisis of confidence having somewhat lost his aura of invincibility.

The five-time Premier League champion has already lost his world No 1 spot and has he not won a TV title since November 2020.

“I’m just playing well at the minute,” Cullen told the PDC. “I think it’s a little bit about having a fear factor about you which I’ve got now as a Premier League player.

“I’ve been on both sides of the fence; I remember going up against Premier League players and questioning yourself.

“I’m not questioning myself anymore. When I play bad I question myself and maybe come out as a loser. It just seems to be working.

“It’s a crest of a wave at the moment. It doesn’t last forever with any player, it doesn’t matter who you are.

“So when it’s going well I’m going to take it. I’m proving a point, there’s a few who might have questioned my Premier League selection.

“Obviously I’ve played decent in the Premier League and won back-to-back this weekend to justify my spot.

“I’m not going to get carried away. I know I’m playing well and even when I’m not I’m still getting results.”

World champion Peter Wright takes on Gary Anderson in the other pick of the quarter-final ties, while Michael Smith – the only player without a win so far this season – meets Gerwyn Price, and James Wade faces Night Two winner Jonny Clayton as the £1 million tournament continues at The SSE Arena.

Ahead of the third week of the Premier League, Wayne Mardle and Colin Lloyd sit down to discuss the latest from this year’s tournament and elsewhere in the PDC in this week’s Sky Sports Darts Podcast episode.

The duo look back at the first four Players Championship events in particular discussing Joe Cullen’s fine form and the battle to be No 1 between Peter Wright and Gerwyn Price, with Lloyd believing it is only a matter of time before the former takes that spot.

Attention then turns to the Premier League with Wayne making his top four predictions, backing Jonny Clayton as the man to beat.

The pair also discuss whether Michael van Gerwen has lost his fear-factor and the need for Michael Smith to get a win on Thursday night.

Check out daily Darts news on skysports.com/darts, our app for mobile devices and our Twitter account @skysportsdarts. We’re back for more Premier League action from The SSE Arena, Belfast next Thursday from 7pm on Sky Sports Arena.