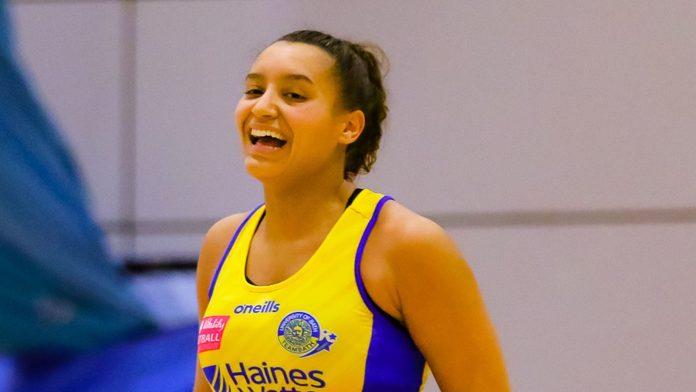 Bath arrived in Yorkshire with three training partners and one training associate after a Covid outbreak; they delivered a 20-goal win over Rhinos Netball; the Superleague continues on Friday when Bath host Storm; the match will be streamed on the Sky Sports YouTube channel from 7.30pm

Team Bath Netball’s head coach Anna Stembridge has expressed her pride at her team’s performance on the road against Leeds Rhinos Netball.

Bath produced a 67-47 victory over last season’s fellow semi-finalists on Monday evening, despite having an extremely disrupted build-up into the contest.

The team travelled to Yorkshire with three training partners and one training associate in their squad following a Covid outbreak within their team and support staff.

Head coach Stembridge was unable to be there for the game and nor was their normal team manager and physio. England captain Serena Guthrie was also still being rested following the Netball Quad Series.

For Leeds Rhinos Netball the match marked their first home game in the competition, after all contests were played at central venues during their maiden season last year. They also arrived off the back of a narrow 45-43 victory over Strathclyde Sirens on Friday evening.

Bath took control early on at the EIS in Sheffield, though, by outscoring Rhinos 19-10 in the opening quarter.

They started the match with their strongest possible line-up; one that included Kim Borger and Sophie Drakeford-Lewis in attack with Imogen Allison, Layla Guscoth and Tash Pavelin in defence.

Rhinos opted for a different picture in attack with new signing Amy Clinton at shooter, Brie Grierson at goal attack and Amelia Hall at wing attack.

During the opening 15 minutes, Borger and Drakeford-Lewis were accurate in attack for Bath, while ample ball was supplied to them as Bath’s defenders poached the feeds into Clinton regularly.

Rhinos hit back during the second quarter and an amended line-up – shifting Grierson to wing attack and introducing Rhea Dixon at goal attack – helped them settle and gain momentum.

Despite Rhinos’ productivity, Bath still led 34-22 at the interval and maintained their advantage throughout the second half, with Lily-May Catling enjoying her Superleague debut too.

“Pride is definitely the overwhelming emotion after that performance,” Stembridge said. “The work and effort that went into the match and the whole week building up to it was incredible and it shows the culture we have within the group.

“We are always striving to have a group of players who all lead and that really came to the fore as they not only delivered their own performances, but they got the best out of each other.

“That was the case in training too, with us coaches planning the sessions and the players running them. Everyone was adaptable and agile in dealing with the situation and there was so much to be proud of.”

Tracey Robinson, Leeds Rhinos Netball’s head coach, led the team for just the second time after arriving on January 1 and she highlighted that she is keen to have an adaptable outfit.

“Bath are a class team, they’re not five-time Superleague champions for no reason so all credit to them,” Robinson told Sky Sports.

“I want to have the capability of having players that can come on and off to do a job. There are 20 games in the regular season, so I’ve got to manage players the best way that I can.

“It’s about getting those connections and making the right match-ups, we got that a little bit wrong tonight, but we’ll come back stronger.”

Rhinos now travel to Wales to face Celtic Dragons at the Sport Wales National Centre on Saturday afternoon and Robinson’s team will then face Surrey Storm on the road the week after.

The Vitality Netball Superleague continues on Friday with the start of Round Four. Surrey Storm’s trip to Team Bath Netball will be streamed live on the Sky Sports YouTube channel at 7.30pm.