Home World Blockades at Canadian border crossings are coming to an end, but protests... 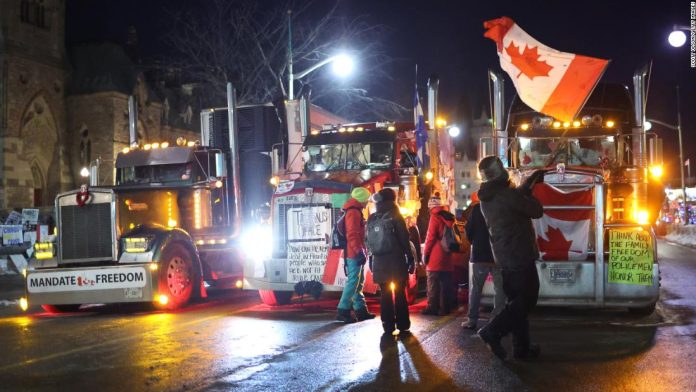 The Royal Canadian Mounted Police announced Tuesday that they have “worked to peacefully resolve the situation” with demonstrators at the last remaining major blockade in Emerson, Manitoba, and are expecting their departure Wednesday.
“We are now confident that a resolution has been reached and that demonstrators will soon be leaving the area and that full access to the Emerson Port of Entry will be restored,” RCMP Chief Superintendent Rob Hill said in a statement.
The demonstrations — in which trucks and vehicles were used to block roadways, in some places for more than two weeks — have left many residents frustrated, local businesses hindered and the Canadian federal government enacting unprecedented emergency powers.
But, there has been progress with clearing the border blockades.
A bridge connecting Windsor, Ontario, and Detroit that is vital for international transport and commerce reopened late Sunday after arrests were made and protesters departed. Highway traffic is also flowing once again through the Coutts checkpoint at the Alberta-Montana border, where police say at least 11 people were arrested and multiple firearms were seized.
But truckers demonstrating in the nation’s capital remain defiant, calling for the “Freedom Convoy” to persist until vaccine mandates and other Covid-19 measures are rescinded.
The presence of the protesters — who agreed this week move out of residential areas and stick to streets directly in front of Canada’s national parliament — has been an ongoing source of frustration among Ottawans and city officials, who said Tuesday Police Chief Peter Sloly is leaving his post.
In his departure statement, Sloly shared his appreciation for residents and fellow law enforcement and described the situation as a “difficult journey.”
“Since the onset of this demonstration, I have done everything possible to keep this city safe and put an end to this unprecedented and unforeseeable crisis,” he said.
Sloly previously noted enforcement during the demonstration has been complex and delicate in part because families are embedded within the protesters. The chief had said repeatedly he did not have enough resources to deal with such a large protest.
While Ottawa Police Services Board Chair Diane Deans thanked the former chief for his service, she opened a meeting of the board Tuesday by saying authorities were so far unable to achieve peace in the city.
“The OPS (Ottawa Police Service) has been unable to adequately enforce our laws and our residents continue to be terrorized, it isn’t good enough,” said Deans, adding that, “I have watched in disbelief as this carnival of chaos has been allowed to continue.”
Residents have told CNN they were dismayed by the chief’s lack of enforcement on their city streets. City officials have said some protesters threatened and harassed locals, including committing racist and homophobic acts, and a hotline was established to better alert authorities of such behavior. Police say they have opened dozens of investigations amid reports of hate crimes, rock throwing and property damage.

Some measures ease while others remain

Stemming from truck drivers arriving in Ottawa on January 29 to show their disapproval of a new mandate requiring them to be fully vaccinated when crossing the Canadian-US border or face a two-week quarantine, the protest has spiraled for some demonstrators into a wider grievance against any and all Covid-19 measures, including mask and vaccination requirements.
Four in every five Canadians are fully vaccinated, and nearly 90% of Canada’s truckers are fully vaccinated and eligible to cross the border, the government said.
While there are no indications the trucker vaccine mandate will be dropped, some modifications to Covid-19 safety measures were announced this week — though officials have been quick to note the changes are not because of the protests but due to decreasing Covid-19 cases and strong vaccination numbers.
Starting February 28, the country will no longer require PCR tests for fully vaccinated travelers and will accept rapid tests, Canada’s health minister announced Tuesday. Unvaccinated travelers will still be subjected to testing requirements and a 14-day quarantine.
“I am happy to announce these changes today, as I know many of us are looking forward to living with fewer restrictions. However, we must continue to exercise prudence,” Federal Minister of Health Jean-Yves Duclos said. “Let me be clear: Our fight against the virus is not over.”
In British Columbia, restaurants, nightclubs, fitness centers, movie theaters and other venues will go back to full capacity by Thursday, according to the provincial government.
Ontario plans to drop its vaccine passport requirements and indoor capacity limits on March 1 if the province’s Covid-19 hospitalization rates continue to improve, Premier Doug Ford announced Monday. Masking requirements will remain in effect for “just a little bit longer,” he said.
“Let me be very clear, we’re moving in this direction because it’s safe to do so,” Ford said. “Today’s announcement is not because of what’s happening in Ottawa or Windsor, but despite it.”

Canada, US governments coordinating over protests

The disruptions at border crossings have had impacts in both Canada and the US, and the two nations are closely coordinating regarding the cross-border travel of people who may try to participate in blockades, Canadian Minister of Public Safety Marco Mendicino told CNN.
“The United States is monitoring carefully the blockades in Canada and what we agreed is that we could continue to share information and to advance the very close collaboration that exists between our CBSA and the Customs and Border Patrol, so that we can identify any potential individuals who may trying to cross the border to advance illegal blockades in Canada,” Mendicino said.
There have also been measurable financial ramifications.
The blockade at the Ambassador Bridge impacted about $390 million worth of commerce a day, Minister of Finance Chrystia Freeland said Monday, and the combined impact of blockades at border crossings, including those in Alberta and Manitoba, has been $500 million each day.
On Monday, Canadian officials moved to allow financial institutions the power to freeze personal or corporate accounts they believe are being used to fund the illegal protests as Prime Minister Justin Trudeau said he was invoking the Emergencies Act.
The law, passed in 1988, can temporarily suspend citizens’ rights to free movement or assembly, though Trudeau cautioned at a news conference, “We are not preventing people from exercising their right to protest legally.” The act provides for the use of the military but Trudeau said he won’t take that step.
“This is about keeping Canadians safe, protecting peoples’ jobs and restoring faith in our institutions,” Trudeau said, adding that the law will be limited geographically and in scope.

Exclusive: China operating over 100 police stations across the world with the help of some host nations, report claims