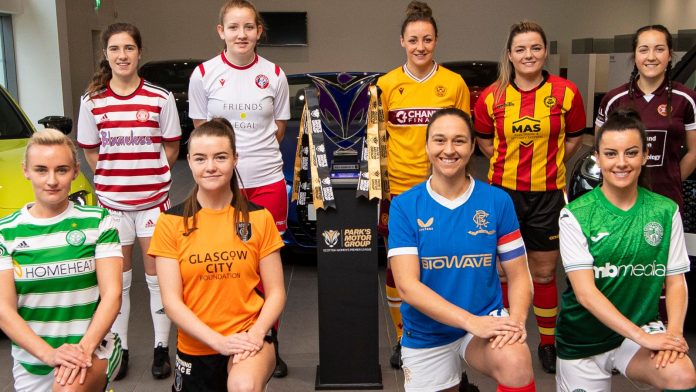 The decision by Scottish Women’s Premier League (SWPL) clubs to form a new league and cup competition can help take the game “to the next level”, says Fiona McIntrye, the Scottish Women’s Football (SWF) chief executive.

From the beginning of next season, elite women’s football in Scotland will become the responsibility of the Scottish Professional Football League (SPFL) after previously being run by SWF.

The majority of the 17 SWPL clubs voted in favour of the move, although the exact number of clubs and the format of the league competition are to be agreed over the coming weeks.

An independent chair, a managing director and an independent non-executive director will also all be recruited to drive the new body forward in cooperation with the member clubs.

Following months of talks between clubs, the Scottish FA, SPFL and the SWF clubs will be invited to become members of a new two-tier league competition, with the SPFL also running a new League Cup at the dawn of a new era for the women’s game in Scotland.

Speaking to Sky Sports News, McIntyre described the agreement as “the biggest change I’ve seen in the game”, adding that it will accelerate the growth of women’s football in Scotland.

“I think it’s the single biggest change I’ve seen in the game, certainly in terms of the structure, organisation and governance,” she said.

“For a long time, all the leagues and competitions have sat under Scottish Women’s Football, who have done a fantastic job in actually getting the game to where it is at this moment in time.

“There’s a sense that we’re ready for that next step now. Our strategy’s about elevating and accelerating the growth of the game, in particular taking the elite club game to the next level.

“It feels like this is the right move that will help us grow the professionalism, but also the opportunity to grow revenues, in terms of broadcast and commercial, which will circulate back into the women’s game.”

After confirming the move, Scottish FA chief executive Ian Maxwell said: “The Scottish FA recently published its bespoke women’s football strategy, Accelerate Our Game, and a key pillar of that plan is to take our elite clubs and competitions to the next level.

“To achieve that we need to optimise the game’s governance and structures and the work undertaken by the Scottish FA, SPFL and SWF, and the clubs within the SWPL, has shown the collective desire to take the game forward.

“With Hampden Park the new home of the Scotland Women’s National Team, and the team playing in front of record crowds, I am delighted that the various constituent parts of the game have come together to agree on a positive route forward for elite women’s football.”

SPFL chief executive Neil Doncaster said: “Everyone at the SPFL is hugely excited by the prospect of working closely with the SWPL clubs to help increase the competitiveness, profile and income of elite women’s football in Scotland.

“I have been struck by the ambition of all clubs involved to drive up standards, take the game to the next level and increase participation across the sport.

“It is clear to see the many benefits that increased professionalism has brought to women’s football across the world. We believe we are well-placed to add significant value to the game in Scotland in both a sporting and commercial sense.

“Lastly, I would like to send my thanks to everyone at SWF, which deserves huge credit for the way it has progressed the women’s professional game in Scotland in recent times.”

Scottish Women’s Football chief executive Aileen Campbell said: “SWF is committed to driving the women’s and girls’ game in Scotland. We are therefore determined to do everything we can to support the elite game as it transitions to the SPFL.

“Football can be a huge force for good and we want to maximise its potential to drive positive change across our sport and society. We need to shine a spotlight on player wellbeing, to push for structural change and equality in boardrooms, and to prioritise a respect agenda. SWF stands ready and enthused to support the Scottish football family on that journey.”